Labels: Kady Stupid, misunderstandings, That Reminds Me of a Story...
There was this kid in my high school art class named Matt Rasmussen. We joked around a lot and I'll never forget a painting he made of a chunk of swiss cheese floating on the ocean. He called it "Turds". He was always saying "turds".

I have a distinct memory from that class one day and I mean it's really vivid. In it, he and I are standing at his desk near the teacher's desk and he's wearing a new orange-ish plaid flannel shirt. He's using the paper cutter. The bottom part of the front of his shirt was laying across the paper cutter and before I before I could say "turds" he sliced right through his art project and also through his brand new shirt. Oh, how we laughed.

In my mind this story happened as if it were yesterday. I tell everybody about the kid who cut his shirt in art class with the paper cutter.

Twenty years later, I recalled the story to Matt. He didn't remember it at all. "Must have been somebody else," he said. Bull Crap, "Matt Rasmussen", if that story didn't happen is any of my childhood real??

Well the point of this whole trip down my made-up fictitious memory lane is that good ol' forgettin' lyin' Matt wrote a book of poetry called Black Aperture and it's getting all kinds of accolades. In fact it was just announced as a finalist for the 2013 National Book Award for poetry! I went to a reading down at the Loft and got him to sign my copy and tried to force him to admit he was lying about the paper cutter.


At least we agree on one part of the story: 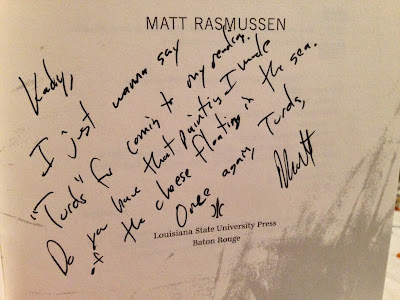 Oh, and you can buy Matt's book here. It's really, really good.

As a former art teacher I would say the likelihood of an adolescent boy slicing into his shirt with the classroom paper cutter while trying to impress the pretty girl next to him is ONE HUNDRED PER CENT. Regardless of any National Book Award in his future.

And what I say goes.

I have the painting "Turds". I think it's in my garage. For reals:)