Not So Great Idea

Labels: embarrassed, Kady Stupid, Minneapolis, misunderstandings, Super Athlete
The weather up here in Minnesota has been a little bit all over the place and last week we had some 50 degree temperatures (that's Farenheit, btw). I got the bright idea to ride my bicycle to work and to do it every Friday from here on out. (It's 19 miles one-way.) Why the heck would I do that, you ask? Well, the weather! And I'm training for a few big athletic events (I'm a Super Athlete, you know). 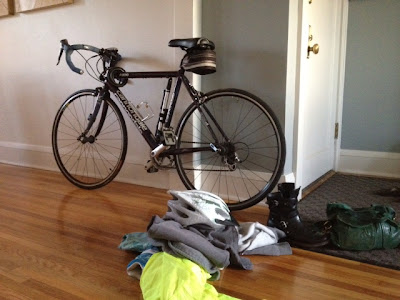 Most people would map out their route in advance when attempting a new 19-mile trek across three suburbs and I suppose I did attempt to do that. Sort of. But I don't have a printer and so I just tried to memorize the route I needed to take. Basically up the River Road, across the worst part of North Minneapolis, onto a Parkway and then onto a Trail and then boom! In just two hours I would arrive to the gym next door to my office where I would shower and freshen up. Fridays are short days at my office and so boom! I'd ride home around 3pm and be home by 5.

Well. I did ride up the River Road and then across the worst part of Minneapolis and then onto the Parkway but the Parkway bike trail was pretty icy and gravelly and so I had to ride on the narrow road alongside cars and somebody threw a cigarette at me and another guy yelled out his window, "THERE'S A BIKE TRAIL!"

My first reaction was to scream back "AS SOON AS THEY SWEEP IT *DUMB-DUMB*!" but I didn't think quickly enough. He was out of earshot. I kept my chin up and rode on. At the next stoplight "Dumb-Dumb" was sitting there with his window still down! I rode up next to him, and calmly explained that I would be happy to ride the bike trail as soon as it was swept. I also expressed that I thought he looked way too cool to be yelling at bikers. He was a super-cool old hippie-type dude with  a great amazing long beard. I had him eating out of my hand before the light turned green and we parted ways with a greater understanding between bike and car. (I do what I can.)

I think that was around the time I took a wrong turn and ended up right by Lake Calhoun. Which is a 20-minute bike ride from my house. The only problem with that was that I had been riding for an hour-and-a-half already. I started to panic. I found a trail map and realized I was way off course (duh) and I needed to backtrack quite a ways to get back on course. So I did.

And then I ran smack dab into a trail. Which I assumed must be my trail, the one that would slide me all the way to Plymouth. I rode it for a long long time in a direction I assumed to be West. I stopped to read another trail map.

Now I was two hours into my ride, and not even half-way to Plymouth. I texted work to let them know. I started to cry. (I think I have mentioned that I'm emotional and I cry basically all the time.) I finally dragged out my phone and entered my work address into my GPS. I wasn't getting any 3G signal. Then I really started to cry. I was in some guy's driveway and then from all the crying my new and very real Ray Bans (a present I bought for myself and a decision that I agonized over but ultimately decided to buy and probably shouldn't have. Who buys real Ray Bans?) fell off my face and landed lens-down onto the gravel and the lens got scratched. Then I REALLY started to cry. I couldn't stop. Ten cars passed me. Nobody stopped. That made me even sadder.

You guys. It's not like I mind a long ride. I ride all the time. I pretty much belong to a bicycle gang:

I've been known to ride the streets of Minneapolis in the middle of the night wearing nothing but this: 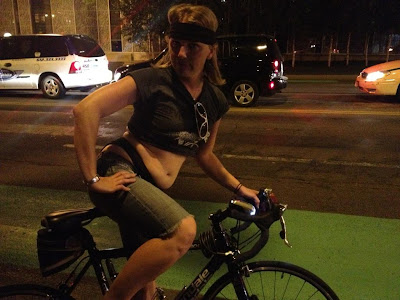 But I was late for WORK. At my NEW JOB.

Finally my 3G came back up and I found out I was still 8 miles from work but at least I got a map to follow. And I followed it. And I made it to the gym for a shower. And to work. Two hours late.

Boy did my co-workers have a laugh over the whole situation. And boy was I famished because before the three-hour ride I only had ONE BANANA. So I ate lunch. Then I ate second lunch. Then I went out for third lunch at Chipotle.

And then it started snowing.

I gave up and made two coworkers take me and my stupid bike home.


Later, I was told by more than a few people that the forecast had predicted the snow and everybody and their brother knew it was going to snow on Friday. I didn't know. I don't pay attention to forecasts. Is that a thing?

I think this drives me as crazy as the time you didn't check to see if that stuff was soap (in Vietnam).

Nice synopsis. Even with a direct route, Bike not advised for tomorrow.