Kidnapped in my birth year 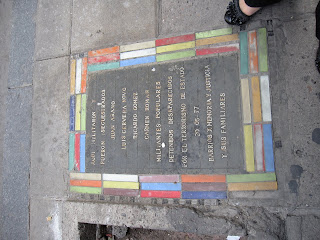 Thousands of people were arrested, kidnapped and disappeared in 1977. They were either protesters, or completely innocent people. Some were imprisoned and had children, who were then illegally adopted out. There are news stories all the time now of grandchildren being reunited with grandparents they didnt know they had. These kids are about my age. We saw a camera crew interviewing a woman in an area of the town, and she was walking with what looked to be her grandfather. On the ground there were paintings all around in a huge circle of white handkerchiefs (shaped like they were tied around a womans head). Apparently after the kidnappings and for years the mothers would come down to this area and wait for their children or get together in solidarity at least...a plea to the government for an explanation of where their children were.
Posted by A Lady Reveals Nothing at 5:27 PM

There is a really good book that documents about these kidnappings and the goings on of the government at that time. i gotta remember the name first.
have fun, be safe, and miss you!