Labels: Sunday Favorites
New to A Lady Reveals Nothing? You've missed SO MUCH. Not to worry. Every Sunday, I dig through the archives to repost an old favorite. Mostly because I'm too lazy to come up with new content every single day. This story originally appeared on October 25, 2010:

My friend tells me the most hilarious story from when he was a leetle tiny boy:Unfortunately, he peed his pants at school. He hoped to get away with it. Nope. His friends were like, "did you pee your pants?" 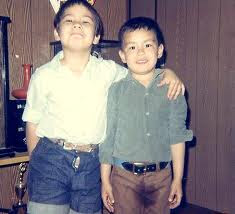 His answer?
"No. Uh....my mom accidentally washed my jeans with my dad's tuxedo."

The following are the details of the story that make me DIE:A. Not only did he NOT pee his pants...B. He asserted that his family was rich and his dad had a tuxedo.
C. He clearly didn't do his research. You can't WASH a tuxedo in the washing machine.
D. If you DID wash a tuxedo in the washing machine, with your little kids play jeans, would it bleed onto the jeans? In the crotch? NO.