Labels: Hal, Hal-isms, irritated, Kady Stupid, Minneapolis
Well, it was just a matter of time. You can't buy and drive a 1987 Dodge Dakota pickup truck that had been sitting in a garage undriven for seven years without expecting a problem here and there. The main problem is that the truck stalls a lot. It just dies every time I try to push the gas during the first ten minutes of running it in the morning. The idle is turned up high enough that I just idle all the way down Lake Street and hope for no red lights. And up until now, I had been able to tweak/restart/jiggle/adjust/swear my way through all of Ol' Blue's hiccups. But the other night, she finally just. wouldn't. start.
At two in the morning.
In Dinkytown.

So I had to get 'er towed to a mechanic. And thus began a week of a new type of swearing. That night Tan from Saigon Garage on Lake Street cleaned out my carburetor for $180. I got the truck back the next day and it did run, but it still didn't seem quite "right".

Two days later, I broke down on the way to work. Directly in front of Saigon Garage. I couldn't believe my luck! Tan got it started though and told me to come back the next day. Well of course I couldn't get it started that night at work and had to get another tow over to Saigon. But I got a new starter for $229 and he did some other things that I couldn't quite understand (his English is not as good as mine) and now Ol' Blue is purring like a kitten and running better than ever!

The point of this whole story is that all week my dad has been beside himself because of me having car problems and being stranded and him being so far away and not being able to help out.

Here's what he said to me:

"KADY. You can't be having your truck towed every day. Not a woman of your statue." 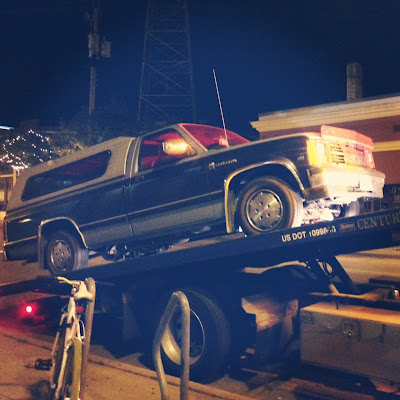 You're really going to stick with "ol blue"? REALLY?

I agree with Hal. A woman of your caliper shouldn't be left stranded.