THE STORY OF THE FANTASTIC RACCOON

Labels: Auntie Kady, Hanna, hilarious, misunderstandings
Hanna found this story in her room when she was cleaning the other day. She wrote it when she was little. I've done my best to type out her exact story, including all the [sic] moments. 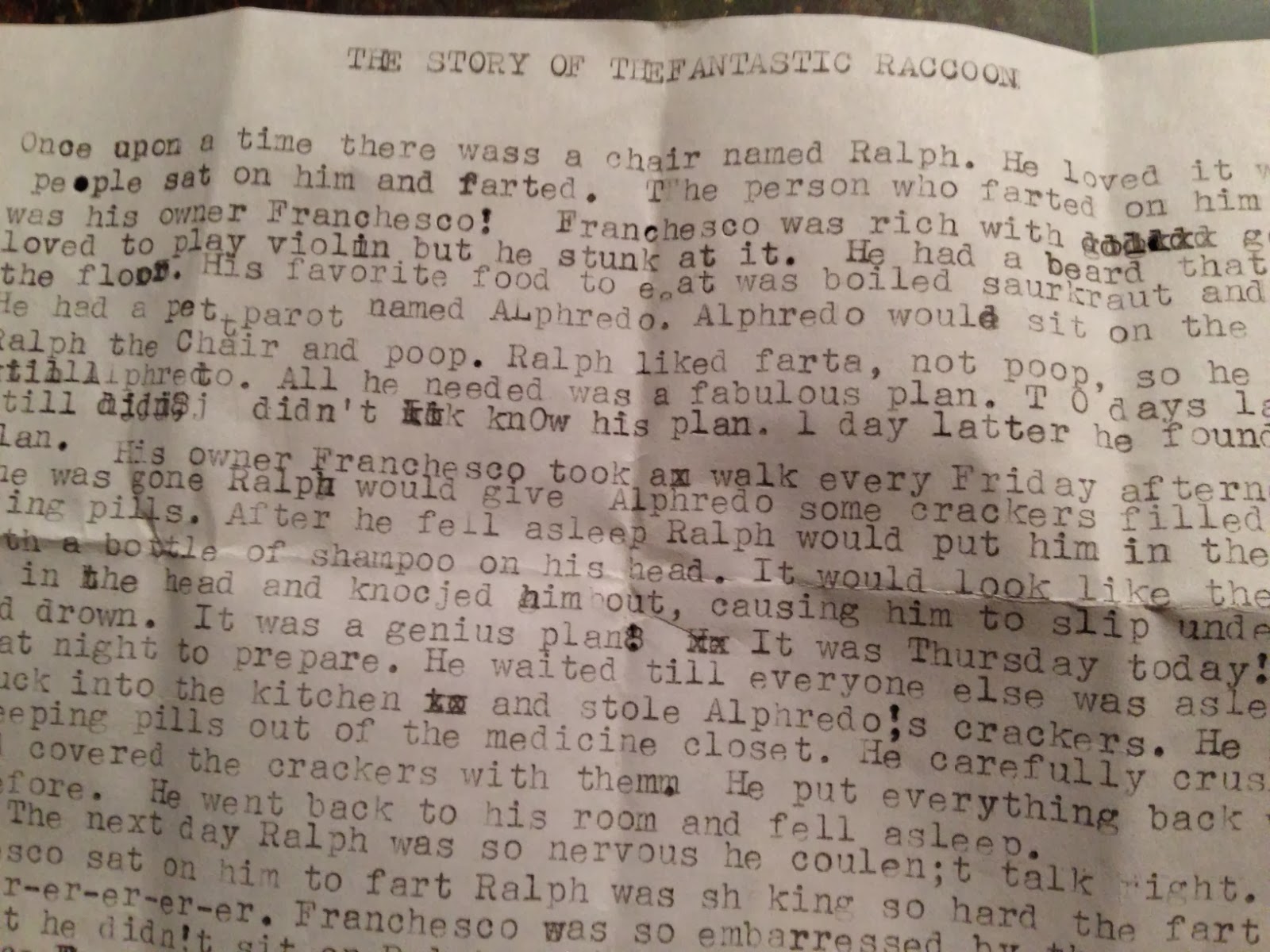 Once upon a time there wass a chair named Ralph. He loved it when people sat on him and farted. The person who farted on him the most was his owner Franchesco! Franchesco was rich with gold. He loved to play violin but he stunk at it. He had a beard that riched the floor. His favorite food to eat was boiled saurkraut and ketchup. He had a pet parrot name ALphredo. Alphredo would sit on the back of Ralph the Chair and poop. Ralph liked farta, not poop, so he decided to kill Alphredo. All he needed was a fabulous plan. T O days later he still didn't kn0w his plan. 1 day latter he found his plan.

His owner Franchesco took a walk every Friday afternoon. While he was gone Ralph would give Alphredo some crackers filled with sleeping pills. After he fell asleep Ralph would put him in the doll bath with a bottle of shampoo on his head. It would look like the bottle hit him in the head and knocjed him out, causing him to slip under the water and drown. It was a genius plan! It was Thursday today! He only had that night to prepare. He waited till everyone else was asleep. Then he snuck into the kitchen and stole Alphredo;s crackers. He got the sleeping pills out of the medicine closet. He carefully crushed the pill and covered the crackers with them. He put everything back where it was before. He went back to his room and fell asleep.

The next day Ralph was so nervous he coulen;t talk right. When Franchesco sat on him to fart Ralph was sh king so hard the fart sounded like brer-er-er-er-er. Franchesco was so embarressed by the sound of his fart that he didn't sit on Ralph again to fart the whole rest of the day.

Once Franchesco left for his walk he beagan his plan. Alphredo flew over and landed on Ralph's head. He poop a horribly large green bird turd right between poor Ralph's eyes. Ralph was so mad. Polly want a cracker" he cackled. He walked to the kitchen with Alphredo on his back, singing a horrible song the whole way. Ralph hatee it when Alphredo sang. He was a terrible singer. He took the crackers down from the shelf. He took the sleeping pill cracker out of the box and gave it to Alphrdo Alphrdotook it and ate it with one bite. "Ha ha ha", said Ralph. Soon enh enough the parot fell asleep. Now for the rest of the plan, Ralph said. He took the parot to the bathroom and set him on the counter while he filled the bath. When it was full he took the parot and put him in the bath. "Now for the bottle", he said. He went to the cabinet and pulled out a bottle. He didn;t have any fingers so he dropped it right away. "oops", he said. He went to pick it up again but it slipped out of his legs and fell on the floor. When it hit the floor the cap broke and fell off. Shampoo oozed all o ver the outside of the bottle. Ralph decided to cleab it off later. He tried to pick up the bottle again but it was so slippery that it slipped out of his legs again and flew through the air, leaving a trail of soap wherever it flew. The bottle crashed into the mirror, smashing it and sending little shards of glass all over the bathroom. Now Ralph was mad. He chased after the bottle screaming and swearing, smashing up the whole house. He speant so much time chasing the bottle and was being so loud thzt Alphredo woke up. "Hmmmmm", he thought, I must have fallen asleep, but I don't remember trying to take a bath." He went off to find Ralph. He was shocked the whole house was shashed up. And there was Ralph, laying on the broken couch staring at a shampoo bottle. He was crying! When Ralph saw Alphredo he screamed and picked up a knife off the table. Alphredo backed up against the door just then the door opened and Franchesco walked in, just as Ralph threw the knife with all jis might at Alphredo. Alphredo saw the knife and ducked, but Franchesco didn't see it. The knife flew through the air, and then it stopped. It stopped lodged in the heart of Franchesco. He died instantly, falling to the ground beforeRalph evennknew he had even come home. There was an instant of silence, then there was a blood curdling scream from Ralph. He ran across the room and flung himself at Franchesco, skreming "Oh i'v killd himm" Alphredo stared at him. Alphredo was a very good parot He thought that everybody was a good person. He was moved by Ralph's crying. "Oh you poor thing", he sobbed "what happened?" Ralph was shocked out of his crying fit. "I , uh, well, there was, ya see, um. Sudde


And that's where it ends.

Posted by A Lady Reveals Nothing at 5:03 PM

What is it about this family and fart stories. Willie wrote one about the "piglet that walked up and just fratted in my face." Then our fascination with murder? Xavier wrote a story about how he likes snakes because, "they spits pozene and kills." Auntie Betsy