When I arrived to Mahe Island in the Seychelles, it was 8am. I got my car, grinded the gears, stalled and hit the windshield wipers instead of the blinkers in front of the man. We laughed and I set off to find my Airbnb. I dumped my stuff, took a shower, put on a fresh pair of undies and hit the road.

Silly little things make adventure for me. I don't need to jump out of planes or go bungee jumping to feel like I'm alive. Give me a car with the steering wheel on the right and the stick shift on the left and I'm "having an adventure".

The roads here are NARROW. They are two lanes, but each lane is only the exact width of your tiny car and every time you pass oncoming traffic you close your eyes and hope for the best. When the bus comes it's especially terrifying. They go a million miles an hour and they are halfway in your lane. Also everybody and their brother just walks on the edge of the road and so you have to avoid the people walking too. There is no "not paying attention" here.

Little kids in school uniforms walk with old ladies going to work. Old men stand of the sides of the road and I wonder if they have anywhere to go. Young men stand at the sides of the road and big trucks come and pick them up for today's work. Dogs are in no hurry at all to cross the road and you almost hit them and they don't even care. Birds don't fly away when you're coming at them...they just keep running on their little feet and it look like their hands are tied behind their backs and you don't think they'll make it but they always do.

I saw a man with one arm carrying a bag of produce. I saw a man with two arms who had one of them all the way in his pants and scratched and scratched and kept scratching even after I passed. I saw a little girl returning home with the bread her mom sent her to the store to get. And I kept driving. I stopped and took long walks on the beach, had breakfast, and took pictures. At some point and without warning the road went down to one lane. Still two-way traffic of course, but only one lane. I was still under the impression that the road circled the island and so I kept on. The road winded up up up and then down down down. I kept it in first gear on the ups because they were so steep and prayed I wouldn't stall or see another car. No such luck. And somehow we found enough space to let each other by. At some points the road was bordered by a cliff jutting up the mountain on one side and dropping off to the ocean below on the other without benefit of guard rails. At other times, there was only a raised lane with dropoffs on either side. It reminded me of a game I play when I'm driving fast on a highway back home. I imagine that there is only my lane high up in the air and nothing on either side but death. How fast could I drive then? In real life I might be able to go 60 or 70 mph and never once leave my lane, but once you play my game and take that same lane and raise it high into the sky I bet you would go SO SLOW. And it's true. That's exactly what you would do, you coward. 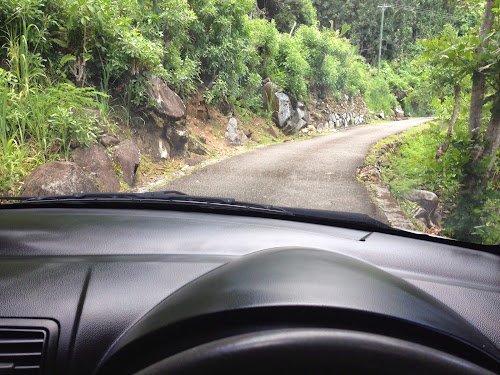 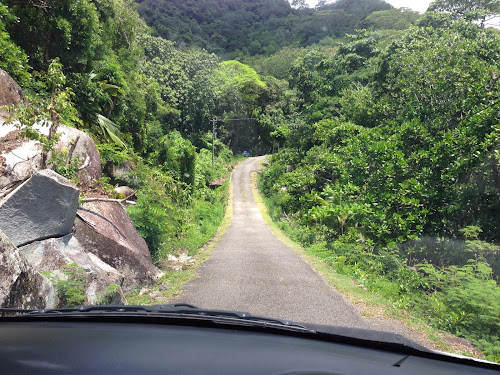 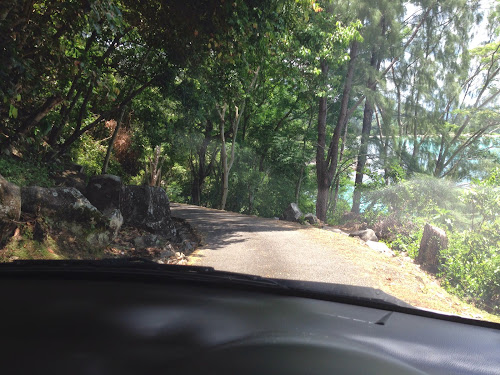 It was pretty scary and I started to think that maybe I should turn around and I might have, too, if there had been any such place to do so. And then the road came to an end. Just like that. A man sat on a chair next to a locked gate and watched me grind and stall and try to turn around. And then I had to go back the other way, this time so glad that the mountain was on my left and I could hug it instead of the ocean drop off when it came time to pass cars again.
Later I looked at a map, because the best time to consult one is AFTER your road trip, right? And it said right there that the road ends. Adventure!
Posted by A Lady Reveals Nothing at 9:49 PM