A Tiny sun spot on my otherwise crappy life

Ross and I bought our tickets to Norway today!

We were going to go on this trip back in May, but fortunately never bought the tickets because Ross' delayed passport didn't arrive until a week after we were supposed to leave. But this is better, so much better!
Work is just as busy, but I'm more mentally able to plan a fun trip now, rather than back in the spring.

We leave at the end of September. On the way there, we have a 2-day stop in Reykjavik Iceland, and then we fly to Oslo. Two weeks later we fly home to Minneapolis from Stockholm Sweden.

So that's the only plan so far. But we want to try to go here: 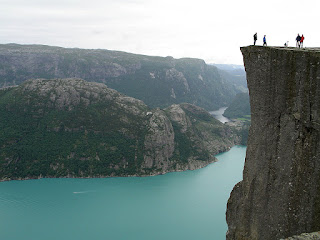 Google preikestolen norway to see more photos. It's like a giant rock that you can hike to.

p.s. my life isn't that crappy! I'm also going to Chile and Argentina in November!
Posted by A Lady Reveals Nothing at 10:25 PM

You are so darn lucky! Have a wonderful time and have a Tom Collins for me. (That's the national drink of Norway)

I see you did some googling Sarah! Google me some more stuff, like a train pass, hotels, etc. Thanks!