I brought Murphy to go to the bathroom at Lund's the other day... 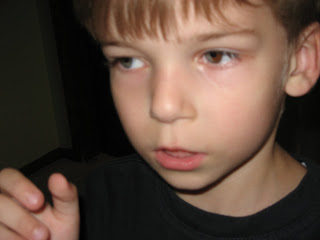 ...and we went to the last stall. I had him "go potty" and there we stood, hovering over the toilet, breathing in the STINKIEST smell in the whole world. The person before us must have been sick. I tried to wipe and swipe the bowl before he tried to go, because little kids are at that height where the dirtiness can actually get on them. Anyways, the whole time, I'm like, dying over the smell, and Murphy who doesn't say much basically ran from the toilet after he finished going to the bathroom. He went over to the door, with his pants around his ankles, like "get me out of here!". The point of this story is that the entire time, I'm saying to him, "Stinky". And, "Icky". And, "can you say, 'Stinky'?" I couldn't use that stall to go myself so I brought him out to the sink area and asked Josette to keep her eye on him while I used a different stall. I realized then that there was a woman in the middle stall. Taking a long time. Probably thinking I was talking about her, while saying "Stinky" six thousand times.

I would like to publicly apologize to that woman. I meant that the toilet in the END stall was stinky, and not her. (Though I decided later that she was probably making some 'stinky' herself, it really wasn't fair what happened there.)

Sorry!
Posted by A Lady Reveals Nothing at 11:28 PM

Shene and I were talking in a bathroom and a lady stunk it up big time while we were in there. I took a breath and there it was and before I could stop myself, I said, "PEW!" Then we broke into the type of laughter that is silent and is NOT allowed to be heard, but saw each other laughing this way and felt like we were in church trying to keep it together. Then we silently haggled over who was going to touch the bathroom door handle to get the HELL OUT OF THERE, before she came out with her walk of shame. Shene caved of course and opened the door. Upon arriving outside of the bathroom the poor woman heard us "release" our laughter into hysterics when the door closed behind us. If I were her I would have just wanted to disapear. I felt bad, but not bad enough to not laugh or apologize or fix it in any way shape or form.

Do you remember my "Ewwww! Gross!" Big Bowl story?

I think so? Please retell.