Labels: embarrassed, tampons
You guys, I certainly don't want to toot any horns, but at my new job I'm an MBNVIP. It's a made-up-by-me-acronym and it means "marginally-but-not-very-important person" and that just means that I have the kind of cube where people come to ask me questions and that is just a made-up-by-me-explanation that basically makes it impossible for me to go on Facebook at work.

Are you following me so far?  MBNVIP.

Anyway, the other day after I sitting with a trainee in my cube for most of the morning, probably explaining something very complicated (or probably not that complicated) I happened to look over at my phone and saw this: 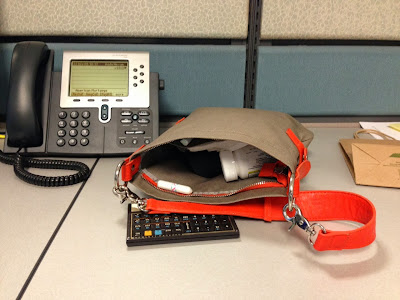 That's my purse and that's a bottle of generic Advil (if I haven't mentioned it I was in a terrible car crash) and most importantly that other thing is a renegade TAMPON which had decided to roll out to the place where people could see it. Of course I didn't see it until about 1pm.

I just really like to keep my period a secret, OK?