It Was the Pizza Man!

Labels: Minneapolis, poop
On Tuesday, I was very ironically on my way to a massage appointment when BAM! An off-duty pizza man rear-ended me. Then my car hit the car in front of me.

And then, my sturdy little reliable eight-year-old-never-had-a-scratch-one-owner 2005 Acura TSX was no more.

It's funny. I left work for the massage appointment, long overdue and very anticipated, missed my exit and then took several wrong turns. I was going to be twenty minutes early and ended up losing 30 minutes in bad traffic. It was bumper-to-bumper. There was time to notice people and I noticed the pizza man. I smiled at him because I liked his sun hat with chin strap and also how his long, long beard was braided. I got in front of him in a fit of competition at a stop light and then several blocks later the sun got in his eyes and he didn't see me and now I don't have a car and my back and neck really hurt. Life is funny sometimes.

It happened so fast! One minute nothing and the next, I looked in my rear view mirror after a horrible crash and saw a braid, a beard, and a deployed airbag. I pulled over and got out to make sure everybody was OK. They were. We started exchanging insurance info and then suddenly I felt a strange feeling...I left my drivers' license with the bearded man and RAN across the street to a children's center where I begged for a bathroom and then had a bout of explosive diarrhea. I ALMOST DIED, OK?!? 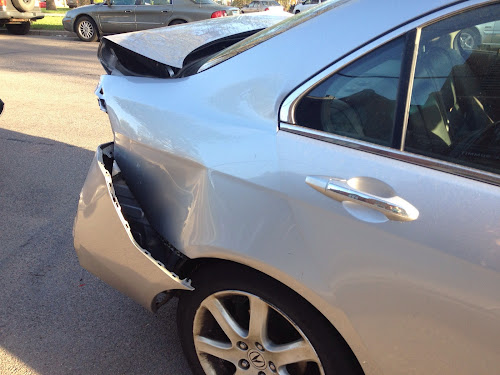 I was able to drive home by propping a taillight where I thought people could see it. The next day, my sweet little basement neighbor man texted to say he saw my car and would help with whatever. We cleaned out the car because I had a feeling it would be totaled (which made me cry) and he followed me to my favorite mechanic Dave Halverson at my favorite body shop in Minneapolis, Halvey's on Chicago. Dave was pretty sure it was totaled too, so I gave him my keys (which made me cry). I guess I'll never take that solo road trip up to Alaska I've been dreaming about. I was gonna put a mattress in the trunk, and now there is no trunk.

My neighbor drove me home and then a rental car was delivered by Halvey's people. Slightly painless. Pun not working in that scenario.

A comment on how I always get people to stage photos: I make them! Do you think Dave wanted to be in this photo? No! But I reminded him about how I almost died and how my unborn children almost didn't have a mother and he was forced to oblige.

I also never got a "sexy lady pose" with the car. Well, it's better late than never!

Look at this sweet "sorry you got in accident and here's a return on that butter we borrowed three weeks ago" gift from J & K: 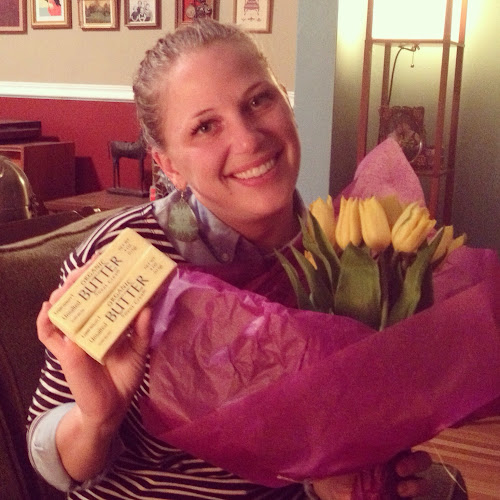 Since the accident, I've been somewhat emotional. OK, I've always been emotional. But now maybe even more than usual. I have been insisting that everybody give me a hug, even like, all the loan officers at my office. All I want in my life since the accident is hugs. Then, today I got a voicemail from the insurance adjuster and he said, "Wow. I can't believe you're OK. He really blasted you," and I started bawling, because. Yes. The pizza man did blast me. And it hurt. And somebody agreed. And I don't know if I'm OK. I'm happy and alive, I guess. Dramatic much? I get to be. I almost lost life and limb in that three-car pileup.

Enough negativity! I like to look at bright sides. For example, my neighbor found a sock I had been looking for FOREVER! And then Dave found the OTHER SOCK TO THAT SOCK!

Tune in for more poop stories. This blog is about poop, after all.
Posted by A Lady Reveals Nothing at 1:12 AM

Accidents scare the crap out of me, too.

Krista, I read your comment six times before I "got" it. Hilarious!!

Too bad Pizza Man was off duty. You coulda got free pizza for life, or something...

So sorry for your loss. Accidents really suck.

That sucks, man. On the bright side, you should get a mint for your totaled car. One time, I was on the receiving end of a very minor fender-bender. (Seriously minor. Like, I was able to wipe away the dust left from the other car's bumper and my car looked like new.) The adjuster came to assess the damage on my car and said "You should get enough for a new handbag." I was expecting $25 because I'm poor as shit and usually my handbags are $19.99 at Target. Boy, was I surprised when I got a check for $300 in the mail. Long story short, you're going to be rich!

I will never race a pizza man on a sunny day. Glad you are ok, but what a hassle. (Oh, and hope you stay ok, soft tissue injury can take a while to show up.)

How awful! I am so glad you survived this in pretty good shape. I assume you've had x-rays, etc, to affirm everything.

I would go to great lengths to find all of my missing socks. But not this far.