Labels: I'm Going to Die Alone, misunderstandings, Romance, video punchline
The other day I was on my way to meet some friends for happy hour after work. While driving down the freeway, I noticed a gigantic beautiful SUV and the only reason I noticed it at all was because it was the only car on the road that had recently been washed. If you live north of the Mason-Dixon line during January you'll know what I mean - but those of you that don't, most cars look like this: 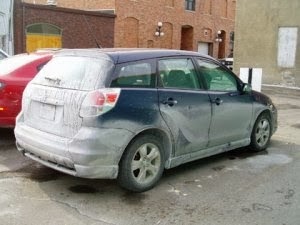 Anyway, this SUV was clean as a whistle! I accidentally noticed that it's driver was pretty cute too. As I passed it, I yawned. I felt like he was staying right next to me, not letting me fully pass him on purpose and so I looked over. The attractive (bald, but bald-on-purpose-good-looking-Bic-razor-shaved-before-actually-going-bald-bald) business-y man was looking at me! He was trying to get my attention! The exchange went something like this (I tried my best to help you to determine which character I was playing by using some gender-stereotypical props. And a dinner plate for a steering wheel, obviously):

I got nervous and tried to speed up and get away from him a couple of times but he kept on pulling up next to me making the "let's get a drink" motion and "can I call you?" motion and I must say we played quite an adorable game of cat-and-mouse down the freeway but it sort of ended like this:

And then I finally took my exit. And let him and my future happiness and all those bald babies slip right through my fingers. I played it cool, real cool. Like I do.


Of course I was confused because nobody ever hits on me and especially not at 70mph. BUT I have to say I was more than a little flattered.

Posted by A Lady Reveals Nothing at 1:16 AM

Well if you were wearing that sexy Hamms beer sweatshirt when you were driving that explains it!

I think you misinterpreted it. If you watch again, he's saying have you been drinking. Then he makes the call sign for I'm calling 911. It's a good thing you got outa there.

Now I know where River gets it! A boy in her class brought a rose to school for her on Valentine's Day but she was home with strep throat. She's got more game at 7 than I do at 40.