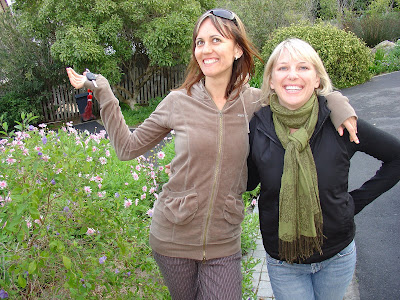 What can I say about Mineska? She is one of those girls you just can't help but be totally comfortable with. When she picked me up I was so excited to see her and she was so excited to see me. It was raining, and she had brought me an extra jacket because it was pretty cold out, but I was warm from the flight and so I didn't use it. We have been talking like old friends the entire time so far. She is full of energy and loves to sing and dance while watching MTV. She also asked if she could give me a massage because she's in school and needs practice. I said I had to think about it. Just kidding.
We had some coffee at a shop and hit a grocery store. She told me that the toilets in America flush opposite the toilets in S. Africa (I had heard this strange fact about Australia, and so I believed her immediately.) Well, I had gone to the bathroom at the airport, but didn't know I should be looking. So, I tried to check it out at the coffee shop but they had one of those toilets that just flush straight down.
Same with the house we're staying at. It's in Hout Bay. Look it up on the internet. The view from the windows of this fabulous house is breathtaking. Mountains out every window. There is a pool and a trampoline and a fireplace. The house is kind of loft-y. There are little living spaces suspended from the ceiling.
So today we're going to hang out in Hout Bay, and I'll take photos. I forgot the cable to put my photos into the computer, but I'll bring it next time and upload some photos onto the blog.

I love the accent here. I could listen to it all day. Like, when Mineska asked me if I wanted a massage, she asked if I wanted a MASS-ajzh.

Oh, and I left my umbrella in the car and she goes, "Is this your 'brelly?"

She said the other day that somebody broke into her car and stole the towels she had on the seat. She didn't think to put them in the trunk, because well, who would steal towels? But they broke her window and stole the towels anyway, and so we're careful not to leave anything in the car when we go into stores and stuff.

Oh, at the grocery store the eggs are right out on the shelves. Not in the fridge.

What else...people here just walk right down the freeway. Beata told me about it, and it's actually true. People just saunter down the freeway with their dogs and you just have to not hit them and that's how it is.

Sorry for the 'stream of thought' type journaling...I'm just trying to fit a bunch of information in a small amount of time.

I'll try to post as often as I can, and get photos up here.

LOVE to all!
Posted by A Lady Reveals Nothing at 6:24 AM