Labels: afraid
So, I innocently was dropping Murphy off at Kasey and Ben's tonight and I come in the door and this is what they're watching. So, yah. I won't be sleeping tonight. Or tomorrow. I'm so over that other dude from the Village. This is the Real Deal. My absolute fear from childhood, now thanks to crapping Peter Jackson, personified as follows: 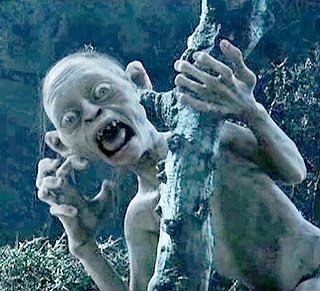 Kelly read The Hobbit to me when I was really little and she used a very scary voice for Gollum. "My PRECIOUSSSSSSSSSSSSSSSSSSSSSSSSSSSSSSSSSSSSS", she would say. Since then, naturally, every 'murdered-in-my-sleep' scenario I have dreamed up has somehow included this being. Exploited by my mean mean sisters of course. Kasey used to call and leave me voicemails from Gollum, which helped. (ha) One time she was dropping me off and she had to drive home to her house and she said she was scared and so I made the tragic mistake of trying to make her scareder (probably to get her back for something), and so I was talking about all of the scary figures in the back of her van lurking in the dark, to murder her on the way home, and I'm getting into my house, and she screams out the van window: "GOLLUM IS CRAWLING UP THE SIDE OF YOUR HOUSE!!!!" HAG.
Anyways, it's a long-standing relationship we have, Gollum and me. Now if you'll excuse me, I'm about to pull some covers up over every piece of my body except my breathing hole, and quite possibly pee in my bed.
Posted by A Lady Reveals Nothing at 11:16 PM