Labels: Around the World 2012, gross
One of the things I like to do as I travel the world is to educate people about America. I try to bring a fair impression of my country to those who might have been misinformed. For example, my poor Englishman friend had no idea from where the term "Douche Bag" originated.

I told him about the erroneous lady-cleansing trend in the 1970's and '80's and the plastic and the soapy water and the tube and the whole bit. And I told him you're really not supposed to do it.

Then I told him the story of the time when my brother found my mom's *ahem* non-disposable *thing* and brought it to the dinner table when we had company:

(My poor mom had it at the top of our linen closet for years and probably got it free after having a baby and never used it.)

Another acceptable definition of the word "Douche":

The sound your mouth should make when you're pantomiming punching something, usually in twos.

I forgot to tell the poor Englishman about the song "Summer Breeze, makes me feel fine..." (you know the one) and how I sang along at the top of my lungs at work, except I legitimately thought the words were "Summer's Eve...". Or maybe I didn't forget. Maybe Ross was giving me the silent "shut up" and maybe the poor Englishman had changed the subject twice already.

See? Educating the World. The poor Englishman probably only previously knew this definition I found on the Internet:

An individual who has an overinflated sense of self worth, compounded by a low level of intelligence, behaving ridiculously in front of colleagues with no regard to how moronic he appears.

Try google images. You'll find one photo of the plastic device but 6,000 like this: 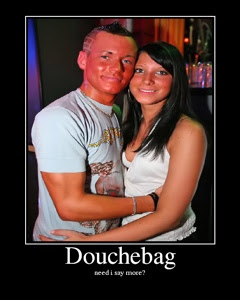 Posted by A Lady Reveals Nothing at 3:46 AM

This reminded me of a story that my German teacher in college told about her first English language gaffe which happened to her when she was in college as an exchange student in America.

You know how sometimes bilingual folks will sometimes drop a word from their native tongue into an otherwise totally English sentence? Well, she did that with the word shower...

"I'm going to go Dusche!" she told her roommates.

To which they responded, "You're going to WHAT?!"

And then they burst into hysterical laughter while she was totally oblivious to why this was hilariously funny... and then finally someone explained to her what a douche was.