New to A Lady Reveals Nothing? You've missed SO MUCH. Not to worry. Every Sunday, I dig through the archives to repost an old favorite. Mostly because I'm too lazy to come up with new content every single day. This story originally appeared on October 28, 2009: 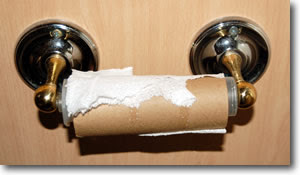 I have no idea how this happens, or WHY SO OFTEN, but I run out of toilet paper all the time. Sometimes I resort to such measures as the half-empty kleenex pack from my purse, and sometimes, if I'm very lucky, I'm saved by the basement bathroom, and find a partial roll. One such night, as I was cleaning in preparation for a visit from family, I remembered I was out of TP minutes before they were set to arrive. That half-roll wasn't going to cut it.

I booked it to the grocery store located a block-and-a-half away.In my haste, I forgot that I was wearing threadbare pajama pants over leopard print underwear, and a sweatshirt.

Before the mean haggy thought completed itself in my brain, I remembered the sweatshirt I was wearing. The Lake Nokomis sweatshirt. That I bought from that very same rack. Then I really laughed out loud. An old man looked at me, and obviously wanted to know what I was laughing at, but it was too hard to explain.