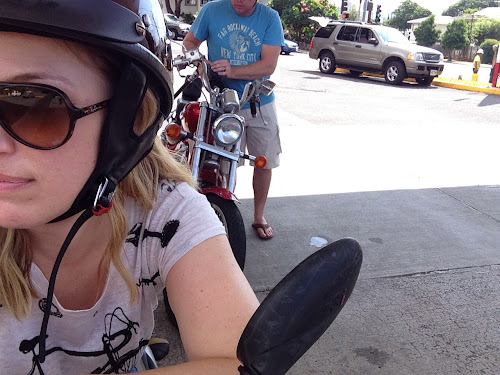 I'm in Hawaii and I'm staying with my friend Mark from high school and his adorable wife Annie. Better hosts you cannot find. Truly.
Today Annie let me use her moped to explore the island and after a pretty embarrassing gas mishap (I kept trying to fill it up with a faulty pump and in the end I realized the tank was full to begin with) I couldn't get it started. Mark was trying to get some schoolwork done and I tried asking all the idiots at the gas station (no offense or anything, I was one of the idiots after all) to no avail. I ended up having to call Mark. He came to my rescue, but in the meantime a German man came to my rescue first and he got it started. Apparently there's a "kill switch" which disables the starter and that switch was turned to ON. Whatever. There was no time to call mark with a JUST KIDDING and so he came to my rescue anyway and then got gas and then had me follow him to the beach. Just to be nice. Like I said, better hosts you will not find.
I decided we should start a motorcycle gang. At every stoplight I asked all the moped drivers if they wanted to join. They all said no. Whatever.
Anyway!
After just about the best day at Waikiki beach ever (lots and lots of butts to stare at - did I mention I love butts?), I got the old hog ready to ride home. I pulled up Mark and Annie's address on Google maps on my iPhone and set it in the little compartment that Mark told me not to put anything in, because if you hit a bump it could fall out. One-and-a-half blocks later, I noticed that my phone was missing. I panicked:
Here's what happened:
Yep.

***P.s. Of course I called Al back and we talked for 20 minutes about how great it was that my phone wasn't lost after all. He told me that on his third day here he lost his wallet and so he related to the panic in my face and he wanted to help me so bad...Also a young couple happened to be standing by when I found the phone and I told them, "I have to tell you a story and you're not going to want to listen but I'm telling you anyway and you have to just listen because I'm like so stupid and relieved." They listened, like champs. They were also very happy for me! The end.

Posted by A Lady Reveals Nothing at 4:11 AM

I'm jealous that you're in Hawaii having adventures (even distressing ones) while I'm stuck in boring Lampasas, Texas studying Microbiology and Pharmacology. Keep up the good work giving me 5 minute escapes that make me smile.

Happy, happy, happy. Alls well that ends well. You can reassure Mark and Annie that they will survive. Heck, we did 7 months with you. (Do they know how long you're planning to stay???)