I Sold My Piano!

Labels: misunderstandings, overheard, The House
And so I'm addicted to Craigslist. I posted the piano a couple of times but didn't have any takers. So I reposted it a couple of weeks ago and a really nice guy emailed and stopped by to check it out. He's a viola player in the Minnesota Orchestra. Alason insisted on being there when he came by to prevent my murder -- the mark of a true friend. Also, I informed all neighbors of his presence and had my pink mace ready. So he liked the piano and thought it would work but wanted to get a professional's opinion. So we spent a couple weeks trying to get somebody out who would confirm that it was a solid instrument. We agreed on a price and then finally, after some hassle, we got a dude and his cronie to come out. He was going to look it over, and if it checked out, move it and tune it all in one fell swoop. Here are some photos of the evening. The whole thing took about an hour, and so I shared a couple glasses of wine with the buyer and we became best friends while the dude was trying to tell him that I was charging too much. But then he asked how much I was charging so that was kind of funny. Also as you can see from the photos the dude was putting his greasy gross tools on my WHITE COUCH. What is wrong with people? Oh, and then he used a LEAF BLOWER to blow all the accumulated dust from inside the piano. Thankfully he waited until it was outside to do that! And then the next morning I went out there and I found CIGARETTE BUTTS on my sidewalk. SHEESH. But, I am so excited and happy that I have this lovely open space in my living room now! And a little moolah in the bank. It's all a part of my master plan to get rid of everything furniture-wise on my main floor and get all new stuff without paying any extra money. So far so good. I took these photos on my cell phone so they're kind of grainy, but you get the picture (pun intended!): 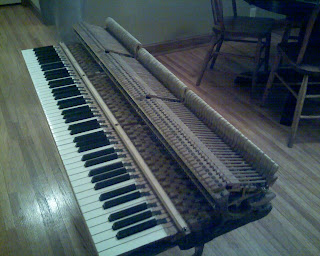 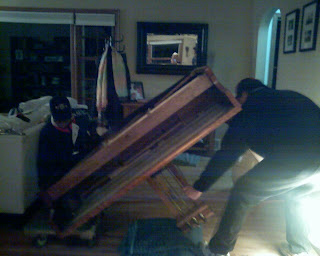 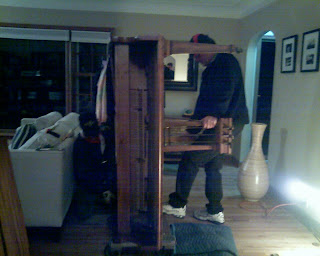 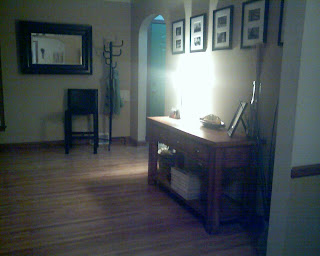 Posted by A Lady Reveals Nothing at 10:04 AM

I'm gonna miss that piano:( I thought it looked nice in your entryway.

The worst of it is I lived there for a year but didn't even notice it was gone. You should have sold it last year, it would have saved me all those late nights stumbling over the piano trying to be quiet comming home.