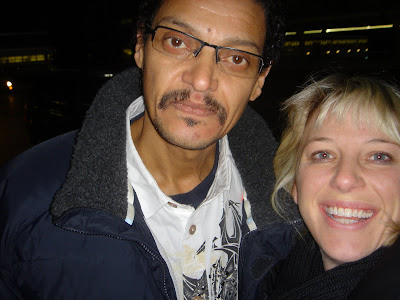 This is my friend from Cape Town. His name is Selwyn and he has been in the States for 6 months working. I met him because he is living in St. Peter, and Cory and his dad had made friends with him, and since I had just been on my vacation to Cape Town I wanted to meet him. I also wanted to introduce him to my other Afrikaan-y friend Beata. (Beata, is that what you are? Afrikaan-y?) So he came to dinner one night and then I also helped him get from the bus station to the airport when he was on his way home. He was part of the District 6 evacuation if you want to google that...a terrible injustice in the 1970's involving non-whites (coloureds in South Africa) and the new white government. Basically the white government told this entire district of people that they had to get out of their homes before a certain date, because it would be bulldozed. And if they weren't out, they were told they would be bulldozed with their home. And then the white government gave the properties to white people. It was prime real estate in the heart of Cape Town, and so as you can imagine was a disgusting and horrible thing to have happen. The new black government in South Africa is trying to make reparations to those who were affected, but it is ten years in the making. Selwyn's poor dad has already died (he was the property owner -- Selwyn was just a young teenager when this happened). But that means that Selwyn will inherit the reparations -- if they ever happen.

Posted by A Lady Reveals Nothing at 8:50 PM