So last night I was sitting at home FINISHING MY PUZZLE (from an earlier post) and sort of feeling sorry for myself because I was ALL BY MYSELF (cue the Eric Carmen song). And then my super awesome friend Summer Grimes who very recently became a follower of this blog texted me that she just drove by my house. I texted her back that I was bored and she better come over. After all I had been awake for 3 whole hours. (Somehow I slept until 4pm on Saturday. I have no idea how it happened, but I feel super awesome because of it.) I spent the 3 hours vacuuming, mopping my hardwood floors, dusting, and getting my guest room ready for a new roommie who is going to be moving in tomorrow. Anyways so Summer comes over and we heated up some chicken noodle soup and drank two bottles of wine and she showed me some stuff she had just bought at the Mall of America. Anyway, have you ever seen somebody get something and you absolutely HAD to have it right then and there? She pulls out these little ladies, and I about freaked out. SO cute. So I just bought them on Amazon.com. I am hereby giving credit to Summer Nicole Grimes for finding them first, in case anybody compliments me on it they were NOT MY IDEA. But they're SO DANG HOT: 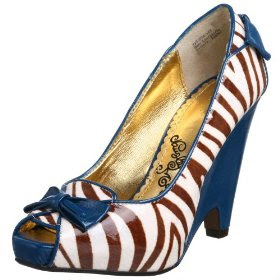 I'm a lame-o poser, I admit it. But come on, wouldja just LOOK AT EM!
Posted by A Lady Reveals Nothing at 11:38 PM

You are screaming Julie Hexum with those shoes, I think.

She had on platform shoes one day while painting her ceiling. The only thing was she was standing on the table and needed more height to reach, thus the shoes. The funny part of this story was, she walked off the table and nearly killed herself. Moral: be careful where you wear those killer shoes.

I guess 'killer' is right.

I'm sorry they are hidious.

You will think they are less hideous, more painful when I am stomping on your face in them.