Labels: San Diego
So we get to the rental car place and of course they want to sell you on every up-charge there is.

But we stayed strong and kept to the plan of getting a mid-sized car with no GPS, no extra driver, no extra insurance, blah blah blah.

So then the guy gives us the choice of a Grand Marquis or any other car. They had Chevy Malibus and Ford Focuses also. Well Keri thought it would be a great idea to get the Grand Marquis because it was huge and would be oh so comfortable. But I didn't wanna. I just didn't want to pull up in that thing. Ya know? So we went for this lovely maroon Ford Focus. Which apparently wasn't available becuase he walked us right by it and over to an ELECTRIC BLUE Ford Focus. ICK. So that's what we drove around San Diego in: 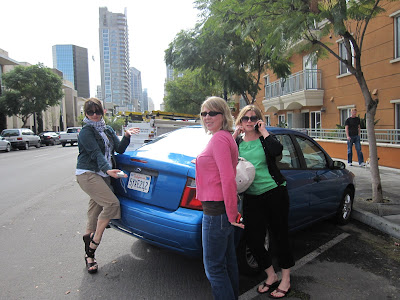 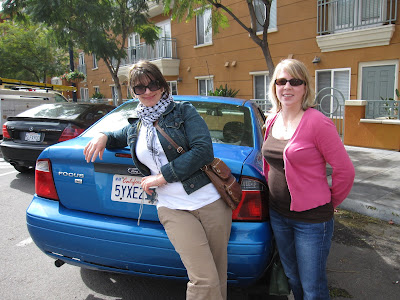 p.s. you can't see him, but behind this car was a man in a car with his window down SCREAMING at his wife. Before I took this photo, I was filling my meter and saw that the meter next to mine was out of time. I was going to be a Good Samaritan and fill it up for him, but then I saw that not only is there somebody in the car, but it's a guy and he's yelling at a woman. So I kept my 25 cents.
Posted by A Lady Reveals Nothing at 6:41 PM

Maybe she would have appreciated it after getting chewed out.

The guy was on the phone in his car, and we assumed it was a woman he was yelling at. Jerk. Or at least in our made up story about him he was.

Yes it could have been a man. But we really wanted to think it was a woman.

Keri's on the phone, maybe he was talking to her and she just couldn't hear him.

we were in little italy. so the two were probably just discussing lunch details. ya know italian style.