Labels: deep thoughts, Fun With Language, irritated, SE Asia
Last week, as I was removing the 37th staple from the 37th bank statement in a mortgage loan file that I was preparing to send into underwriting, I couldn't help but feel VIOLENTLY ANGRY towards the loan officer who stapled them all together. It's like, I know where the bank statement stops and also where the bank statement ends. Do we really need to be stapling them? My nails are just tore up, guys. TORE UP.  Gosh my job is so irritating. Probably the worst in the whole world. I can't think of any worse job in the whole world. I'm paid hundreds of dollars a day to remove staples. It's not enough if you ask me.

These mobile salespeople in Vietnam would agree that I am so mistreated:


It's a difficult yet effective way to sell stuff on the go. You can even operate a food truck this way. Got a  pho (noodle soup) business? Bring it to the people. I saw a woman with a pot full of soup on each side and asked her if I could try lifting it. 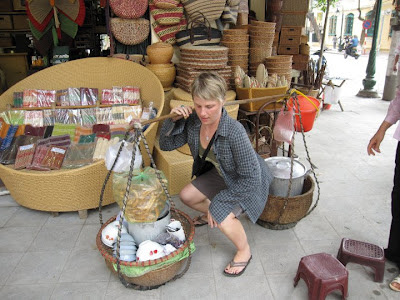 O. M. Gee!  I felt like a champion power lifter.  It was so heavy.  HEAVY.  That smile is actually a wince. 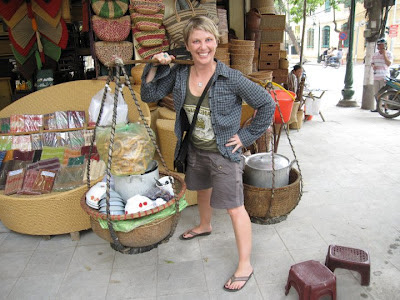 So, you cart around thousands of pounds of merchandise hoping to sell a couple bucks' worth each day. Later on I told her about the staples and the low pay. (In sign language of course.) She was like, "Lady. You got to QUIT. That sucks."

I wouldn't like your job either. I LOVE pho, but I think I might tire of hauling it. Of course if I got super tired I could just sit down and eat it. Unlike your stapled papers.

Oh, little grasshopper. The things you can learn from your big sister.