New to A Lady Reveals Nothing?  You've missed SO MUCH.  Not to worry.  Every Sunday, I dig through the archives to repost an old favorite.  Mostly because I'm too lazy to come up with new content every single day.  Enjoy!  This story first appeared when I lived with my parents back on July 14, 2010:

My dad and I bonded over toilet seat repair yesterday.  But not in a good way.  About two weeks ago, I leaned to the side to wipe, because that's how I do, and the toilet seat snapped off on the left side.  (I do not approve of between-the-legs wiping.  It doesn't work for the 'front-to-back' rule, and also not for number two, and so for 33 years I have been a leaner-wiper.  Ooohh...I'd love to hear your comments on this subject...maybe an unofficial poll in the comments section.  And remember, you can remain anonymous!  But I'LL know who you are, because I have ways of finding out.)

Anyways, of course my dad was angry, because who breaks a toilet seat?  ME.  His no-rent-paying, delayed-lawn-mowing, in-charge-of-nephew-who-spreads-sand-on-precious-grass-watching, internet-time-spending, TV-watching ingrate of a daughter who never can quite read his mind about pet peeves and irritations early enough to prevent them from happening in the first place.

Fast forward to yesterday, when we decided to run some errands and go to the bank and post office.  I had to exchange a $5 Canadian bill into real American money and he had to deposit cash in order to buy another dog my mom doesn't really want him buying.  (A discussion fight for which I was the mediator.)  Anyway, I wanted to spend my $4.55 US money on something spesh, because I arrived at that $5 bill by over-flirting with an adorable older German man from Fort Frances who happened to dine at one of my tables.  I decided to take my Prostate-Cancer-Recovering dad for ice cream, and why the heck shouldn't we stop into K-Mart and I'll pick up a brand new toilet seat while we're at it?

I grabbed the cheapest toilet seat, three brand new clean $1.79 toilet brushes for good measure, generic Swiffer dusters ($5 cheaper than Swiffer) cuz we out, and an Aveeno SPF moisturizer to stop my freckle-mustache from getting any bigger.  I got the heck out of there for only $41.51.  Take that, Target!  Good thing I saved all that money on the necessities, so that I could spend $19.99 on moisturizer.  But I digress.  Two Hardee's ice cream cones later we got home and set to installing the toilet seat.

My favorite part was CLEANING THE GUNK OUT FROM UNDER THE OLD SEAT BOLTS.  Gross!  But so satisfying.  Insert rolled-dad-eyes here.  My second favorite part was when my dad had to remind me again that it was almost impossible to break the toilet seat.  By muttering.  Under his breath:

UPDATE:
Click here to read about how exactly one year and 37 days later my dad broke the toilet seat. 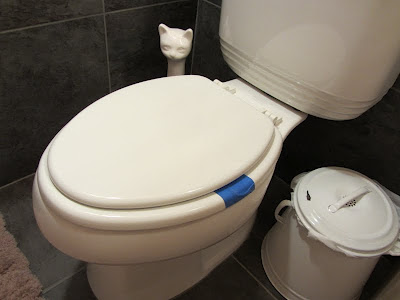 You and your Dad. (need a sitcom)

Thanks, dbs. And also, no thanks. I think the world can only handle so much Hal. Right here on this blog.