Labels: Sunday Favorites
New to A Lady Reveals Nothing? You've missed SO MUCH. Not to worry. Every Sunday, I dig through the archives to repost an old favorite. Mostly because I'm too lazy to come up with new content every single day. Enjoy! This story originally appeared on June 10, 2010:

On the left, please find my passport photo, taken back when I was Scarlett Johansson.  On the right, a Visa Photo I had to have taken in New Zealand so I could travel throughout Southeast Asia.  After ten tries and a really dumb lady photographer I was getting pretty irritated.  Plus tired?  I don't know.  The point is...cram it, every Passport-Stamping-Customs-Staff-Member who has ever had me come through their line.  They look at my passport, then at me, then back at my passport, and then they say (yes, they ALL say it):
"You shouldn't have cut your hair." 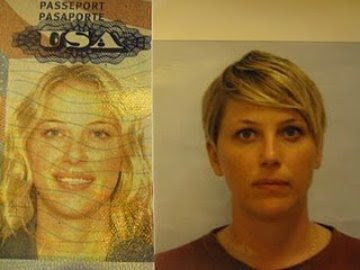 My drivers' license photo is almost identical to the one on the left.  And, since tomorrow is my b-day, I have to renew my license and get a new photo.  Crap.  As far as taking good photos, well...it's like Summer would say.  "You're not very good at this."
Posted by A Lady Reveals Nothing at 7:00 AM

I happen to prefer the short hair version of Kady myself.

Everybody knows that you have to say that because you're my MOM, mom.

The short hair one is very 'deer in the headlights'. I prefer longer hair on you but the short is pretty awesome too. (and I'm not saying that just because I'm your fake adopted Mom)

This post is an oldie but goodie...and also, one of quite importance. Have you noticed the strong resemblance you have to Shiloh Jolie-Pitt in your short hair? You may just be really related.