Thanks a Lot, Siri

Labels: embarrassed, misunderstandings, Summer
Has Siri ever embarrassed you?

Last night I was texting Summer (I think we were talking about how when you've decided to make a significant purchase and you're sick about spending a lot of money it's hard to be nice to the sales people. Impossible to even crack a smile.) Anyway, that's not the point of the story.

I was working late and walking to get dinner at Subway. I was using Siri's voice text so I didn't have to text-and-walk-and-get-hit-by-a-car. And then Siri kept on a-recognizing what I said: 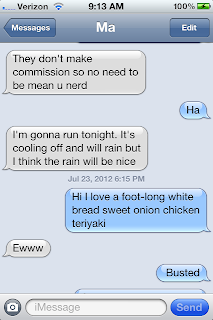 Later that night, Summer went on to run 12.1 miles. (We're training for an August 4th half marathon.) I did not. I worked late and ate 12.1 inches.
Posted by A Lady Reveals Nothing at 9:08 AM

When you said you were texting Summer I seriously thought you were texting, you know, Summer, the season and we were about to read your conversation with Summer. Yup, I'm an idiot (but I bet you would be the one who could write a great post about texting summer.)

Hey, I thought it was a cuban pulled pork sandwich. And I bet you ate 2 inches per minute. That could be listed as a "2 IPM" dinner.

Mmm... Subway. There are worse places to be caught eating before a half marathon. Sometimes I stop by for dinner after I have class late, and I tell my husband every time that I got a six-inch when I ate an entire foot-long.

dbs. If only this was the first time her name confused somebody.

Chris. I did change my mind, however Siri didn't pick up on that piece of the conversation.

lj. I think that's a totally acceptable lie, because technically you did get a six-inch. "Plus."

dbs when are you going to accept it? I'm here. I exist. A lot on this blog. lj--hilarious!