Labels: embarrassed
So I received a mysterious invitation a couple of weeks ago. It was from a couple of my girlfriends and it basically said, show up at 2:30 on November 21st. Bring an appetizer and a "creative change of clothing".

I wasn't sure what that meant, and so I tried to get a hint of some sort but they wouldn't budge. It's "open to interpretation" they said. So I didn't really get anything together and then November 21st arrived and I sort of decided last minute just to raid my closet to see what I had. This is what I came up with: 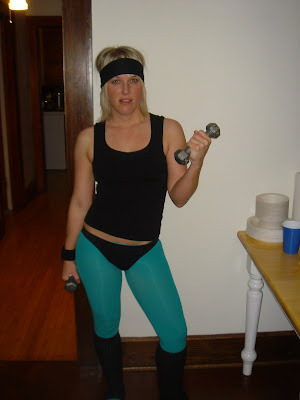 So I arrive, in my regular clothes to find a house FULL of people, including boys. I was pretty embarrassed because I'm not sure why but I thought it was just a girls only party. Sometimes I forget that my friends are married and that they invite boys to their parties...anyways, I was sort of nervous. Why did I bring tights and a bikini bottom? I thought it would be SO funny to dress like a gross 1980's work-out person, but then boys being there made me want to die. Would we have to go out to dinner in our outfits? Would we have to throw it all in a bucket and play a game to win pieces of clothing? I was dying to know.

We were instructed to draw a number from a hat and then were divided into two teams. Team one and team two. I was on team one. We were told to choose a team name. We chose Closet Thespians. Team two became Mermaid Supper Club. And then the following announcement was read:


Welcome! We are so glad you've accepted our mysterious invitation. As you see, you are among friends. So there really are no justifiable excuses for not totally giving into the following assignment. Seriously, your friends will think you're lame if you don't act ridiculous and just. give. in.  Like Einstein, we are very PRO-imagination, but to push your boundaries even further we've decided to give you some interesting parameters ("knowledge") to work within.

The parameters were these:

You have two and a half hours.
You must make a short film, and it must be at least ten minutes in length.
You must use the given props (mean man mustache and bling teeth).
You must use the line, "When you told me that catfish had 27,000 tastebuds, was that a lie too?"
Filming ends precisely at 6pm and you must finish completely.
All members of your team must appear in the video, and at least three people must change their wardrobe.
You have a $20 budget for props.

I got a very nervous feeling in my gut. I hate this kind of pressure. We immediately got together though and tried to come up with a concept. Since both me and another friend had exercising outfits we decided to do a story on two runners, formerly friends and now rivals. We kind of decided early on not to waste time shopping for props and just to use the time we had to do the concept, rough character sketches and film.
We also had scrubs, a 1970's pimp style outfit, a vintage coat with coyboy hat, and a monster mask with sleeping bag cloak. We wanted a fight scene, we wanted a hospital scene, and we needed to somehow incorporate the props and random line about catfish tastebuds. Here are some pictures of us working... 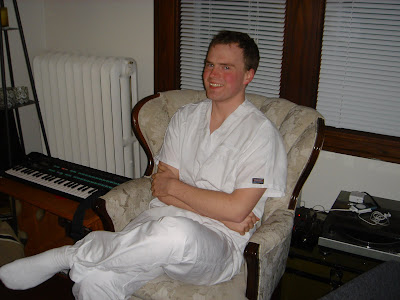 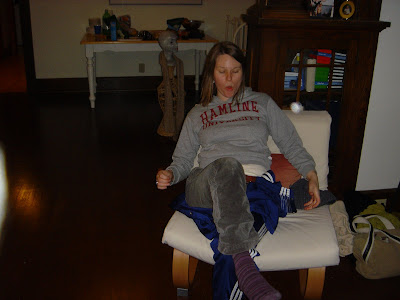 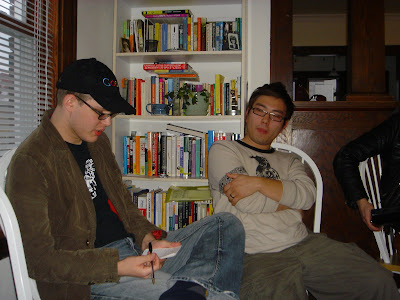 I will post our movie as soon as I get it emailed to me. And by the way, it was the most fun ever. We had so much fun filming and the night ended by everybody watching and judging the finished product. And we won! More pics... 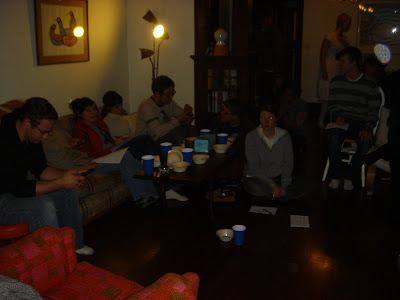 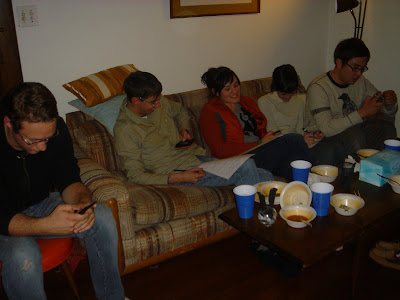 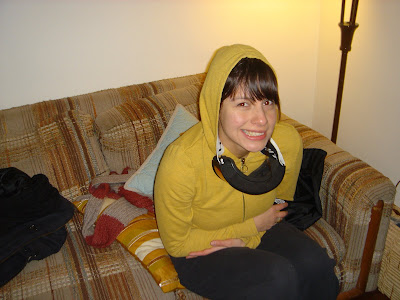 Posted by A Lady Reveals Nothing at 11:35 PM

This is the coolest thing! What a great night. Can't wait to see the movie!

I love the 80's workout clothes. I think the outfit's making a come-back.

Kady, I laughed so hard at your outfit, your hair and your face are just TOO MUCH!! And I cannot even mention the green tights or I will get hysterical. I was a fan of this story in the first paragraph. What a creative idea, I cannot wait to see the video, I no longer need a life, I can just live viacariously through yours.

I feel kind of robbed... I kind of was waiting for my name to come in there in the idea department in the outfit choice, but I never saw it... do I have a case?

Yes you helped. Everyone: Kasey helped.