My Musings on Australian Roadways, However Inaccurate they May Be

It seems to me that nobody really speeds here.  And I should know, because Teri and I rented a car and traveled two motorways, for a total of 14 hours.  If you look at a map of Australia, we covered about one millimeter of it.  If my sarcasm is lost on you, what I'm trying to say is I probably don't know what I'm talking about, but here it is anyway:

They seem to have cameras everywhere for speeding.  They take a picture of you and just mail you the ticket.  Back in Minnesota this doesn't fly because people have argued and gotten attorneys and everything, more or less to say just because you have a picture proving that I was speeding (or running a red light) doesn't mean I really was speeding (or running a red light).

When you get to the age where you're going to get your license, you have to have a big 'P' posted on your car.  This stands for 'Provisional' and means you can drive, but not before you have a certain amount of hours practice and you can only go, say 80kph instead of the actual speed limit, whatever it may be.  Then when you're done with your RED 'P', you get a GREEN 'P', and then you need so many more hours, with fewer restrictions, and then you have to pass a written test.

You get an allotment of 9 points and then your license is taken away.  Speeding ticket?  3 points.  Anybody in the car not wearing a seatbelt?  3 points.  Etcetera.

All over the roads there are signed warning against sleepy driving, like 'Yawning? Power Nap NOW.' and 'Nap Area Ahead' and my personal favorite: 'Don't Sleep and Drive'.  There are billboards with photos of bloody terrible accidents that say, "Slow Down, Stupid."

All this in the name of saving lives.  (Take a cue, America!!)  Anyway, so here you'll be driving the speed limit, which on the most busy highways is only 100kph, or 60mph.  Anyway, you're the fastest one.  Most people drive UNDER the speed limit. Yes we saw a few jerks fly by, but for the most part, everybody is pretty chill on the road.

So, the other day, Teri and I were driving the Great Ocean Road, which is similar to the Pacific Coast Highway in California in that it follows the coast from Melbourne westward and is surrounded by beautiful scenery.  But apparently it is a high accident area.  Suddenly all of the traffic was stopped.  We saw that a police officer had pulled everyone to the side of the road.  We waited in line, wondering what it was all about.  Turns out he was giving EVERY SINGLE DRIVER a breathalizer.

I thought that was so awesome.  I asked if I could take a picture and he was like, "absolutely".  The policeman was really good natured and was totally OK with us laughing the whole time.  He said that in Australia they don't need to have any "probable cause".  If you're driving, he can pull you over and give you a breathalizer.  I say that's brilliant.  I don't know the statistics and I don't do research on my opinions, EVER...but it seems like that's a good way to keep your nations' roadways safe. 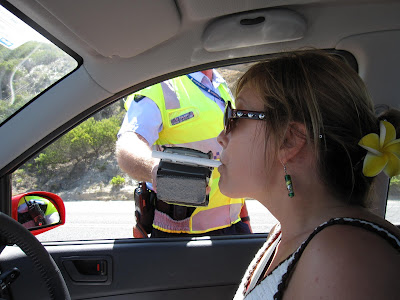 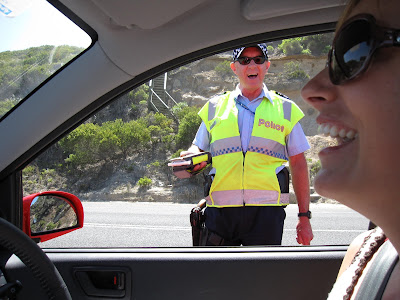 Posted by A Lady Reveals Nothing at 6:46 AM

I think it sounds rediculously stupid.

As you drive on the other side always remember you should be in the middle of the road if you are by the edge you are on the wrong side, been their done that, take care Rick, Cathy, Kevin

Haha, Good thing you weren't drunk Teri! That is so funny.

My germaphobe self is wondering if everyone has to put their mouth on the same tube?????? Puking a little in my mouth. Love, jacqui

I love that bottom picture. It's such a good one. They are both smiling and Terri has very nice teeth.