As far as I can tell, the object of the game is just like American Football.  You try to get the ball across the line for a touch down.  If you don't make it you can kick it through a goal post.  If you make it you can kick it through the goal post for more points.  But, these guys wear no helmets or padding.  The ball is still in play even if they are tackled.  If you tackle a guy, all the other players run up and make a big poop pile, and then the ball comes out of the poop pile and they can still try to run it in.  Once, the ball was in a poop pile for over two minutes, and then it came out, and yep, still in play.  Sometimes the ball goes out of bounds and then gets thrown back in, where the guys give eachother a boost, to JUMP up and get it so their team can have the ball.

Sometimes the ball goes flying into the crowd and once, the guy next to Teri caught it!  That's like catching a puck or a baseball!  But you have to return it.

Rugby is a big deal over here.  There are the "Super 14" teams, which are made up of 5 Aussie teams, 5 South African teams and 4 NZ teams.  These teams play eachother from February to May and then the "All Blacks" is the main NZ team.  Some of the Super 14 players form an All Star team to make up the All Blacks.

The crowd heckles, but the hecklers are actually pretty polite.  The following are some of the things they yelled at the players, and yes I was taking notes:

"That's against the rules!"
"Honestly that's rubbish!"
"Wanker of a call!"
"Couldn't catch a cold!"
"Shoulda kicked it when you had the chance, man!"
"BORING!"
"Go back to boring school!"

One of the All Blacks was voted the 3rd hottest sports person in the world.  Daniel Carter, #10.  He played tonight on the Canterbury Crusaders team.  He even models underwear. 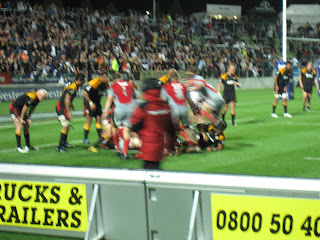 Here's a poop pile, those guys just wait for the ball to pop out and then they run with it again!  Look how good our seats were!  I guess the closer you are to the field, the cheaper the tickets.  Craziness.

After the game, the players come out and sign autographs.  We got to meet some of the players!  (It rained during the game and so that's why my hair is jacked.) 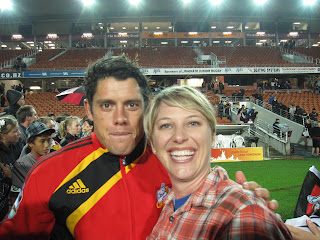 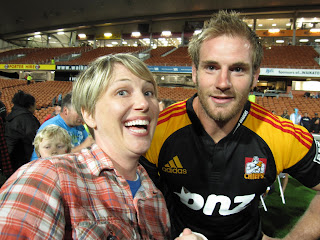 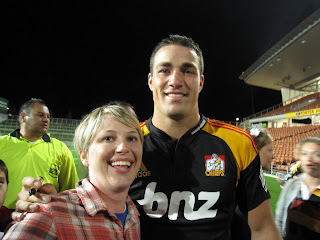 In this next photo, first check out the gun show, and then look up to the guy's ear.  It's called "cauliflower ear".  When you're in the poop pile, your ears and the ears of the guys on the opposite team get sort of squished together because your heads are clunking over and over and then you end up with inside out ears.  Google it.  ICK. 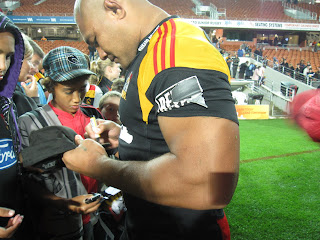 Posted by A Lady Reveals Nothing at 5:06 AM

Where are your hands in those pictures, Kady? I know where my would be. Love, Jacqui

The other difference between football and rugby is that rugby players are much cuter and in better shape.