Labels: family, Hal, life up North, misunderstandings
My dad and I were bear hunting when I was 14.  We were sitting up against a hay bale.  I was oddly quiet, and ol' Hal was wondering why he didn't have to constantly shush me like usual.  He looked over and noticed that I looked pretty sad.  He asked what was wrong, and I said, "Dad?  Were you and mom really going to get a divorce?"

He was confused, but remembered that the night before after hunting we had stopped into a shack belonging to a guy he went to high school with.  While we were there he told the following story:

"Well, Dianne and I had HAD it.  I packed up my guns, my dogs, my clothes, and took off down the driveway in the truck.  I saw Dianne running after the truck waving her arms, so I stopped.

"We stared at eachother for a while, and finally I turned the truck around.  I unpacked all of my stuff.  We realized we could never get a divorce because neither of us wanted those darn kids." 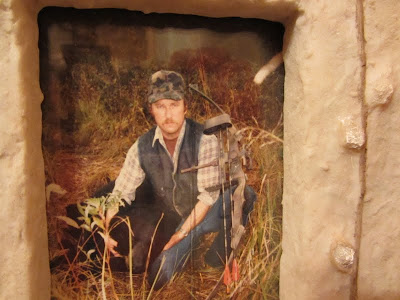 Still keeping the folks together,
Kady
Posted by A Lady Reveals Nothing at 5:56 PM

Awwww! What a sweet story!

Larry and I had one of those moments,and we weren't even married yet. But fortunately, we had a cat that we both wanted. Saved by the cat!!

I bet it happens a lot actually.