Fishing for The Authentic Experience

Labels: Around the World 2012, Hal
I love fishing. I don't need to catch any fish or anything, I just love being in the boat, feet up, waiting for a tug on my line. It's easier and more lazy if the tug never happens, and so I don't much care if it happens at all.

On the island of Gaafaru in the Maldives, I was so happy for the opportunity to go fishing with Mifu's family, free of charge.

The first time, it was from shore. I was given a pole with a short line on it with a hook on the end. I was instructed to stand in the water, and then as the millions and zillions of little fish swam by me, I was to flick the hook in their midst, jiggle the line a little, and FLICK it back, fast and hard. Hopefully there would be a little fishy on the hook. I flicked and flicked and tripped over my feet (any idea how hard it is to walk on the rocky ocean floor in flip flops?) and hoped to catch one but also hoped never to catch one, as I soon realized I would have to touch the fish to get it off my hook. I don't like touching fish. Also I didn't have anywhere to put a fish once I caught it. The locals all gathered around the shore to watch me try, and a few real fishermen came into the water with me. They were catching them left and right. I just couldn't get the hang of it. Also my pants were getting soaked because I couldnt hold them up properly. Two times I flicked and got a little fishy on my hook. I screamed! The villagers laughed! The fish fell off the hook! Both times! It was fun. And I'm glad I didn't actually catch anything, because, ew. 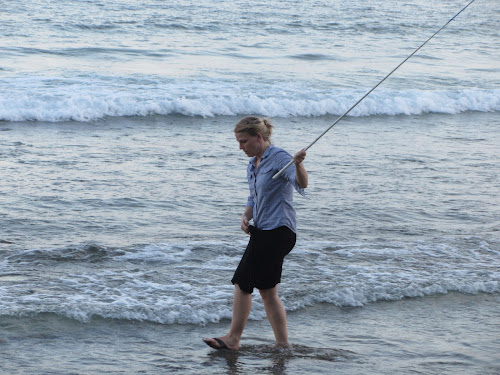 The second time, Mifu's brothers took us out on their boat for night fishing. I was told that they don't use poles. Instead, they just drop in a line and bring the fish in hand-over-hand. Summer and I were given little white gloves, and I was glad because I kept picturing the Old Man and the Sea and his poor, bloody hands trying to bring in that big fish. I was told if I felt a tug, to release and let the fish swim away for a few feet and then YANK! the line and bring it in. At first, we weren't catching anything. We dropped our lines in the water, using chopped up octopus as bait. Nothing. We "reeled in" and moved the boat almost immediately, and I rolled my eyes, imagining I was fishing with my OCD dad Hal Hexum and we were going to just move every five minutes and never relax and actually fish. We dropped our lines in again. Pretty soon they started biting and they never stopped until about an hour later when we decided to go home. I've heard of such fishing occurrences, but never experienced one myself. My dad calls it "not being able to keep your line in the water", and that's exactly what it was like. The fish were almost biting faster than we could pull them in.

Unlike fishing in Minnesota, we were allowed to catch as many as we wanted with no limits, and no license required. For the first ten or eleven fish, I was given the line after the fish bit and Mifu's brother had already set the hook. This was a little disappointing for me because I was dying to catch my own fish. After a while though he let me try it on my own and I caught two all by myself. One of them was the second-biggest we caught all night! Of course the Maldivians were baiting my hook and getting the fish off the hook. Because, ew. 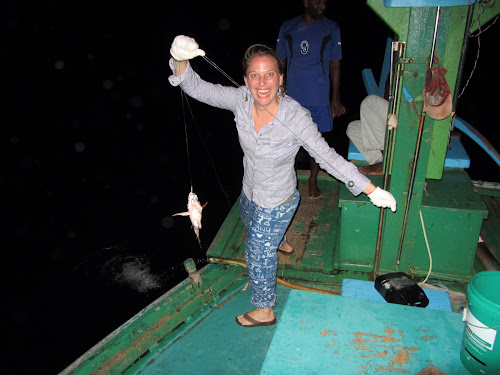 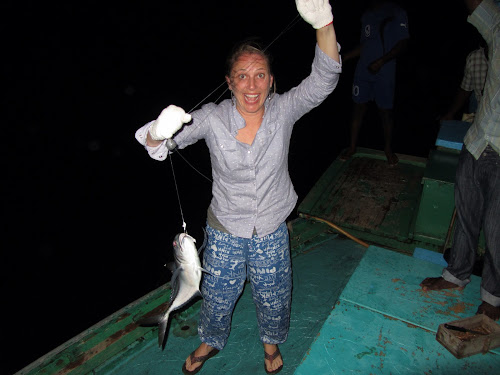 Unfortunately, Summer didn't enjoy herself as much as I did. She does NOT like fishing and only came along for the boat ride. She said "no" and "I don't want to" several times to the men who kept handing her the line with a fish on it and she felt forced to comply (kind of like when you're offered food in someone's home in some cultures. There is no "no"). I would say she loves fishing just about as much as I love animals. 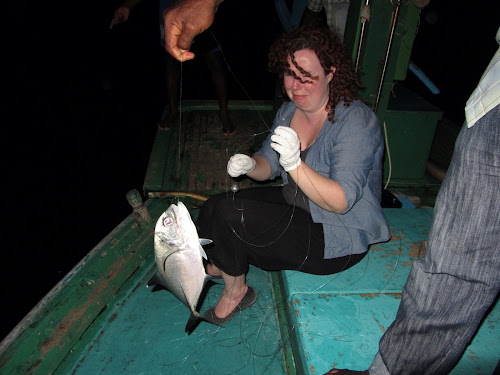 We caught 27 fish in all. Never once on this trip have I ever thought that ol' Hal would enjoy anything I was experiencing, (the man considers a trip to the grocery store 'traveling') but I know he would have really liked this fishing trip. I could see him getting excited, just as I got excited every time I pulled a fish in, and it made me miss home a little bit thinking of him that night. 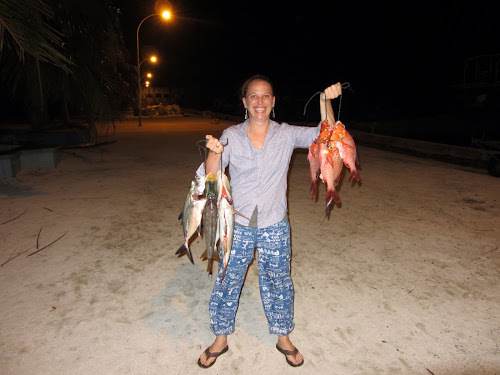 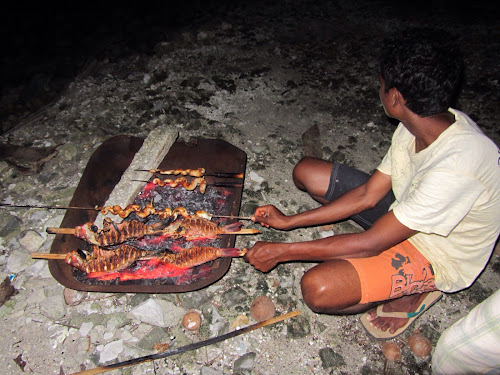 Not sure which part I liked best: catchin' em', or eatin' em'.