Labels: cancer, family, Hal
So my dad rolled his truck while running an errand before taking my mom to the Mayo Clinic in Rochester to have her lung cancer removed. No joke. Here's the photographic evidence: 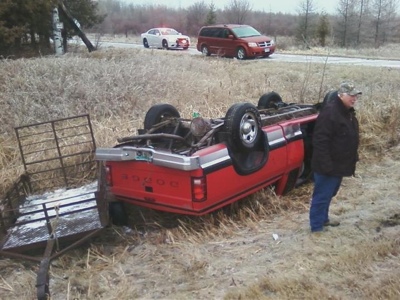 Apparently somebody slid through a stop sign on the icy, icy roads and my dad hit them. Both vehicles went into opposite ditches. My dad's truck rolled over, the airbag deployed, and he had to cut himself out of the seatbelt and escape the flaming, exploding* wreckage. As pictured above, the trailer landed in a foot of water; the truck miraculously did not.
The funny thing is that after my dad landed upside-down in the ditch and oriented his disoriented self and then cut himself from the seatbelt by which he was hanging, and then escaped the flaming, exploding* wreckage by wedging the door open, which took several minutes as you can imagine (and BTW my dad is severely claustrophobic and being trapped like that is like his WORST fear), he rushed to the aid of the people in the other vehicle. He found them completely unharmed, upright and gabbing away on their cell phones, obviously completely uninterested in the other car or its driver.
Kelly assures me he's totally fine.

Hal-ism: "I shoulda chewed them out. I didn't even lose my cool."

*the words flaming and exploding were added for dramatic purposes. Neither are true or accurate depictions of the scene.
Posted by A Lady Reveals Nothing at 10:46 AM

Omigosh, that was a close call.

I'm so glad he is ok. Glad Mom wasn't in the car too. Such a hassle now to find a new vehicle or get this one fixed. But at least you don't have to get a new DAD!

I'm so glad he's okay. How horrible for Hal! Sorry life is shitting on your family these days.

Those other people are awful,horrible specimens.

Hal's like a superhero...I'm glad he didn't lose his cool.