Labels: Around the World 2012, Super Athlete

This morning I had the privilege of working out with the Maldivian Association of Distance Runners. At 5am. No joke. I woke my sorry American butt up and walked to a running track to meet with the die-hard group, who meet every single morning at 5am. Seriously.

I was feeling very nervous because I haven't run since I did that 7k in Berlin, and I was sure that these crazy marathon people would leave me in their dust. Fortunately for me, they were only set to do an "easy 6.5k" this morning. Fortunately again, three other women showed up. I started feeling better. And then I was introduced to our coach: Naseer Ismail, two time 800-meter Olympian (1996 and 2000). Yikes.

We started with an intense stretch and warm-up session, in which we hopped and skipped in place, did lots of calisthenics and that thing where you move your arms all around, and then we jogged a very easy slow 400 meters around the track. "I can do this..." I thought, but joked that I hoped the 400 meters counted towards our total of 6.5 kilometers for the morning. It didn't.

And then, we set out.

The city of Male in the Maldives technically a very small island (its the most densely populated city in the world), which has a ring road circumference of 5.3km. MAD does most of its training runs on this ring road. Including all of its long runs. It's just about 3 miles, and so if they want to do a 15 mile run, you got it: 5 times around the island. (Makes me appreciate the miles and miles of running track and trails back home in Minnesota.) Mercifully it's also a very flat city, Maldives boasts the lowest high-point of any country in the world. (7 feet above sea level.) 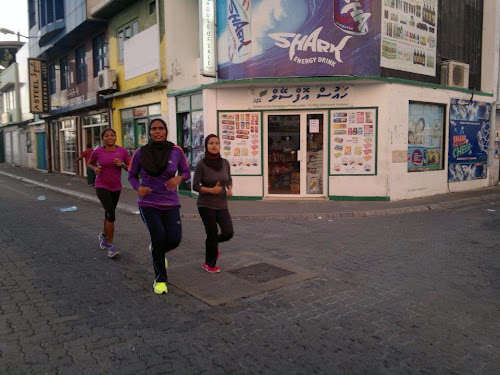 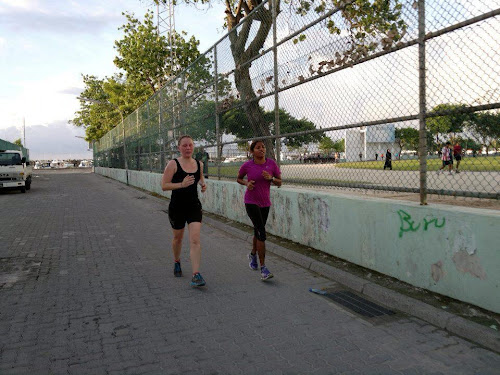 
It was HOT. My asthma started acting up, my face turned full flush beet red, and I thought I was going to die. Twice. After we finished running, we had to run yet another lap around the track before we were finished. And then I thought we were done. Nope. I expected to first die, and then to go home and sleep. Instead, Olympic Coach had us do three sets of thirty push-ups, sit-ups, and back sit-ups. And after that, more stretching (oh how I looooove stretching), and another warm-down lap around the track. I learned that we did 7.1k excluding the track laps. But I count every step and every track lap, and so in the end I'm calling it a total of 7.9k, or 4.75 miles! 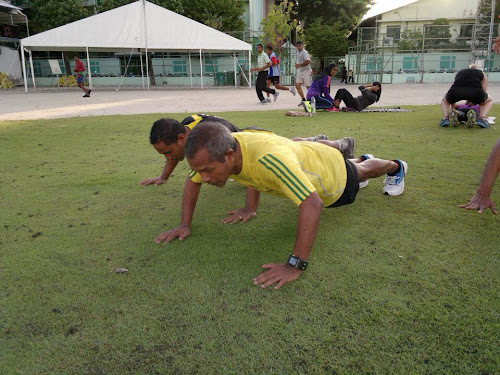 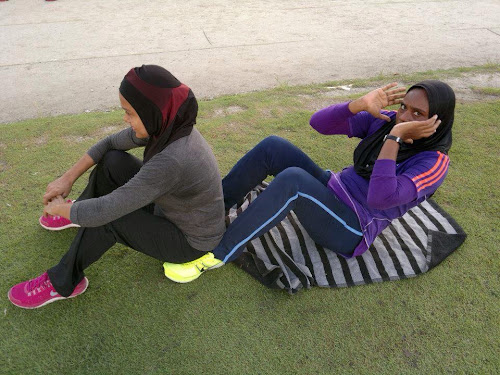 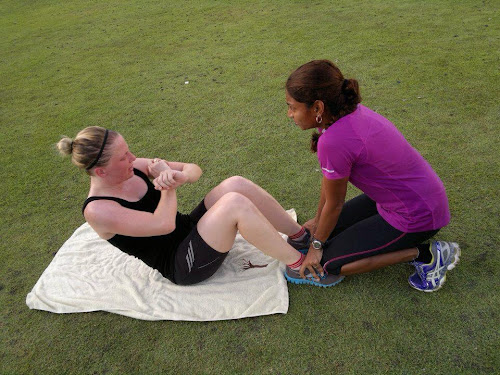 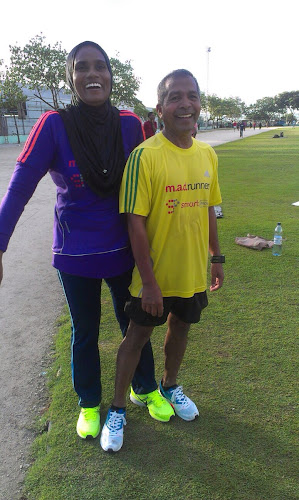 Runners are the same the world over. They like to meet in groups, encourage each other, joke around, tease a friend for their brand new, too-bright shoes, (pictured above) and go to breakfast in their sweaty, sweaty clothes afterward. Here I am receiving a police escort: 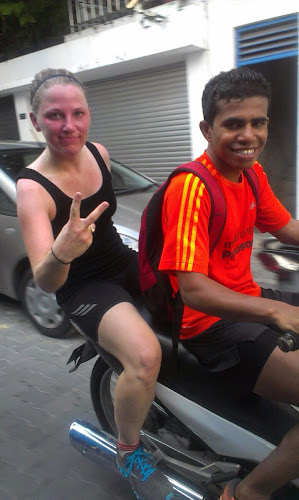 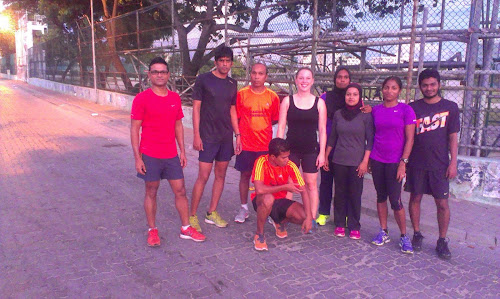 The Maldivian Association for Distance Running and their honorary guest for the day: Me.

I'm so proud of these guys, most of whom are running their first marathon in Singapore on December 2nd, and so grateful they invited me to join them on a training run.

Posted by A Lady Reveals Nothing at 8:15 AM

That is so cool. Great story! Also, I'm laughing at how red your face got.

And where was Summer during this training event? :)

Summer was dying of a cold.

You really need to write about how long it took for your face to return to normal. Ha ha!

they surely are MAD Runners.. its a grt story.. it seems that running is one strong element of their life... way to go runners..