In Sarajevo, Bosnia, Ross and I stayed in a guesthouse owned by a guy named Oliver. When we arrived, we got to chitchatting with the group of travelers who had formed in Oliver's common room and the usual questions came up...where are you from? For how long are you traveling? What do you do for work?...etc.

That last one is always a little difficult for me to answer, because of course at the moment I'm unemployed, and I have held a few different jobs over the past few years. Bored with my own repeated story I usually say, "I worked in an office" or "I helped people buy houses." Depending on the asker's English comprehension level and the amount of time available, and frankly whether I feel like hearing the sound of my own voice, I might give the full story. This includes an explanation of how in December of 2009 I quit my office job in a mortgage company and since then have traveled off-and-on, going home to the U.S. to work and save for additional travel. I have bartended, waitressed, worked for a utilities company in Louisiana, Michigan and Arizona, and covered the maternity leave of a former coworker at my former office. That night in Sarajevo, I had the time, a captivated audience, and I felt like telling the complete story.

"You've bartended?" Oliver asked. "Would you like to help me at my club on Friday night?"

"Uh...yah!" I responded, excited...not only at the prospect of actually doing something as exciting as bartending on vacation, but also, in some way, to repay his kindness in letting Ross and me stay for free in his home. He had already picked us up from the train station, fed us a *wow this is incredibly delicious* meal and offered as much beer as we wanted to drink, and I suppose I felt the imagined pressure of an exponentially growing debt to this man's hospitality.

The club is called Fis Kultura, and he opened it during the siege in Sarajevo. Back then there was no running water, sporadic stolen electricity, bullets whizzing by, and nothing to sell, but Oliver opened it anyway. He had a few pool tables and everybody basically sat around playing pool. From time to time, if somebody brought in a bottle of alcohol, he would sell it. Opening the club was Oliver's way of creating normalcy during wartime, and the club definitely has a 'cozy neighborhood bar' vibe to it, to this day.

We got to the club at 8:45 pm, and Oliver unlocked the doors. He instructed me to put all of he beers that were piled up in crates into the beer refrigerator while he fussed around with the music. An important cord was missing from the DJ equipment, and Oliver left me to go find a new cord.

"Wait!" I pleaded, terrified of being left alone. "How much does everything cost?" He quickly ran through the prices of the different kinds of beer and the various bottles above my head, but of course I wouldn't remember them all. And then he left. I didn't have any customers yet but was terrified that somebody would show up. I washed some dishes, chopped up some lemons and limes, wiped the counters obsessively and shook in my boots. A pretty girl with long dark hair and straight-across bangs came in. "Sarajevsko", she requested.

"English, please?" I asked and she said the same thing, in English. "Four," I said, holding up three fingers, and made my first sale. She laughed at me since "Sarajevsko" is not a Bosnian word, but the name of a beer. Thus, repeating it in "English" basically just meant repeating it. And then I realized I forgot to ask Oliver where the beer opener was located. I looked around, frantic, apologized, looked some more, but thank goodness she said she'd be all right and left the bar with the unopened beer. (Totally illegal in Minnesota.) As soon as she walked out, I found three openers hanging overhead. Finally Oliver returned, triumphant, with a tiny little connector cord. We had music! I also beamed, proud that I had made a few sales in his absence. All by myself. Without speaking the language.

Every time somebody ordered "Tuborg", another type of beer, I thought they wanted "two" of something. "English?" I would ask and they would look confused and repeat "Tuborg". "OH! Sorry," I would reply and cackle, embarrassed. Things went this way for most of the night, as we got busier and busier. 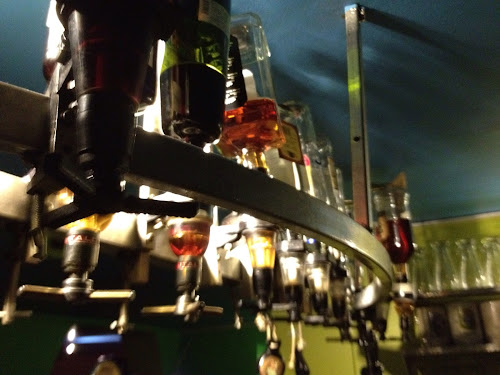 I did NOT know how to work these things.

Whenever I started to feel overwhelmed, there was Oliver, taking orders or restocking glasses just as I was about to run out. We got a nice rhythm going, filling orders and trying to stay out of each other's way in the tiny bar area. He gave me a few pointers: "I noticed something about you. You grab the glass like this. Grab it like this, and you won't put fingerprints on it. People will appreciate." Or, "put a straw in the Pepsi" or "ask people if they have smaller change." I found myself trying to please him and was very proud when he called me a Monster and a Busy Bee. "You have missed working. I can see it's been hard for you to be away from it." And he was right. Being busy at the bar was really good for me. It's hard to explain, but traveling for extended periods can make you lose your sense of purpose. Of course that's the whole point and most days it's really nice taking a break from responsibility, but I felt so happy to be busy there, in a strange way that I hadn't felt since arriving in Europe. But maybe I was too happy and too busy.

Oliver stopped me at one point and gave me the best advice I have ever received. "Slow down," he said. "These people are patient. They know they will get their beer. You're going to burn yourself out." I was embarrassed at first, like a child who's been scolded, just like when he told me I was holding the glasses wrong. But I realized he was right. Of course he was right. I was running around his club, frantic, probably sweating, trying to make sure to be the perfect bartender so that nobody had to wait for anything. As soon as I applied his suggestion, I began to really enjoy myself. He even forced me to take a break, taking over the bar for me as I sat down in his office and sipped a Jack Daniels on the rocks that he poured for me.

Of course my presence as the bartender who spoke only English was bound to illicit some confusion with the customers. I got a few different reactions. My favorite? "You're from Minnesota? How exotic!" Ha! Yes. Me. Exotic! Mostly they just asked, "What are you doing here?" "Just passing through," was my initial reply, but once in a while I'd catch Oliver smiling when I said, "I'm helping my friend."

He let me help again the next night. He offered me a permanent job, too, but of course I couldn't take it. 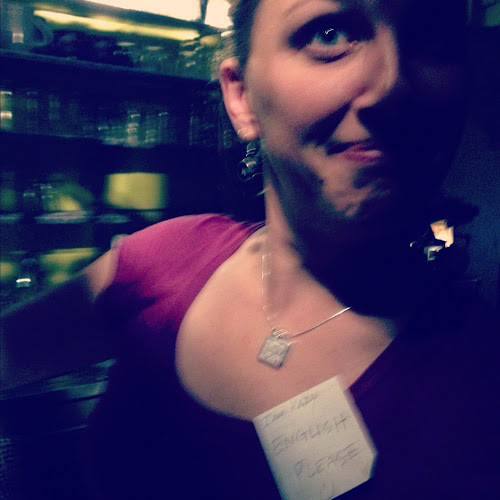 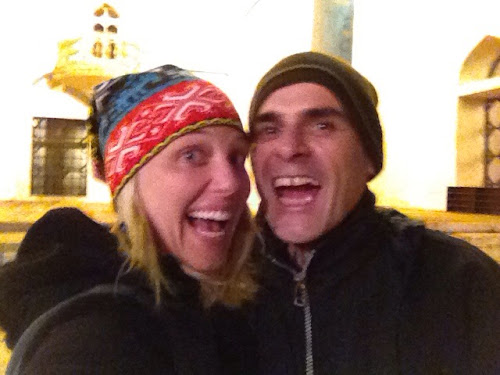 I love it that you did this.

Also, you seem more exotic with each post you write these days!

Me too, Kerry! It was a trip highlight for sure.