Summer and I spent the better part of four days traveling from Goa to Rajasthan, India for the sole purpose of going on a desert camel trek. We braved trains and buses and creepy starers and even a few mean people to get here. And it was worth it. We took a jeep ride out into the desert at 6:30am where we had a campfire breakfast and then saddled up and rode off into the sand. We saw villages and people and more sand and in general had a nice relaxing time. It was so weird staring at the butt of the camel in front of me, because they truly looked like a CGI thing on some Star Wars movie. They have two knees! One bends forward and the other back. Their leg makes a 'Z' shape when they lay down. And it's so scary when they get up and down! You have to get on them while they're laying down and then hold on for dear life while they stand up. 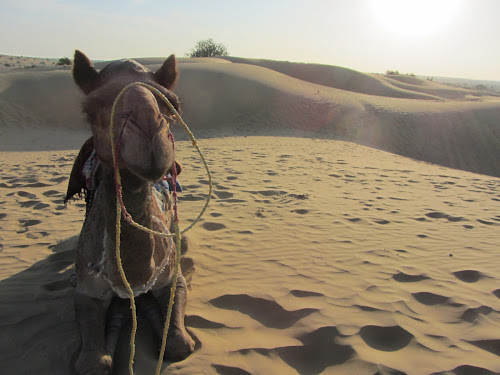 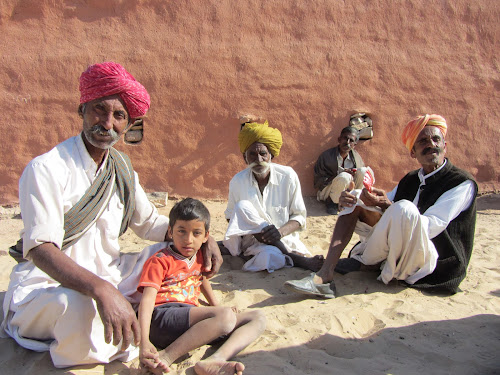 I must have said out loud posted as my Facebook status several times that I hadn't been sick in India for 28 days and the devil must have heard me because I got sick. Real sick. While I was supposed to be enjoying a camp out under the stars, I moaned and groaned until I fell asleep without any dinner and woke up at 6am because I had to barf. So I army crawled out of my sleep mat and barfed six inches from my pillow. Then I covered the barf with a little sand and stuck a stick in it so's I would remember where the barf was, and then army crawled back into my mat and fell asleep again until 8am, when I had to get up and go to the bathroom. I barfed again into a tree. Then I went back to bed and here's a picture of round three, taken by my best pal Summer:
I would like to remember the trip differently though, like as the time I actually had some fun with animals. (The trick was to imagine I was just riding a horse.) Still terrified, for sure, but a tiny bit less now: 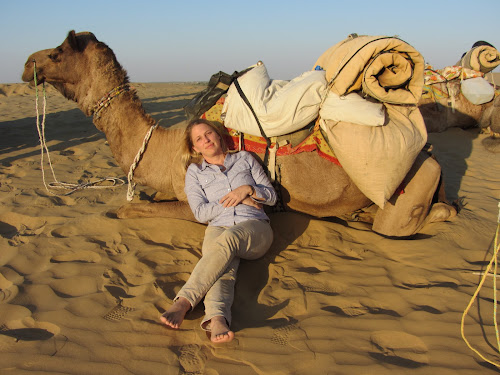