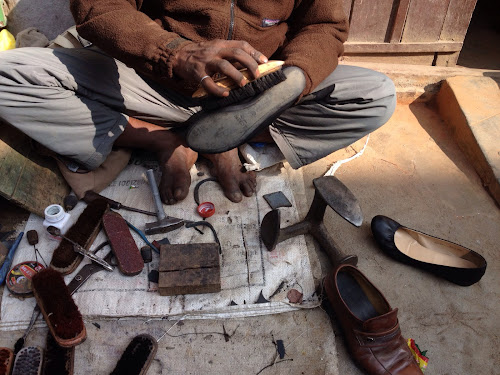 Last thing I did before leaving Kathmandu, Nepal? I got my shoes shined!

I asked the shoe shine man on the way to lunch what he would charge me and he said 100 rupees. (85 rupees = 1 dollar) At lunch I asked an American expat living in Kathmandu how much a shoe-shine should cost. He said around 50. My waiter said he pays 20. So after lunch I told the shoe-shine man I would pay him 50. He counter-offered with 75. I said, "I know you charge everybody else 20. I will pay you 50."

Lucky shoe-shine man got a 100% tip, too, since he did such a nice job, it took forever and I was feeling generous and cash-rich. (It's this thing that happens every 'last day in a country' where you're suddenly forced to spend your money because you miscalculated how much you'll need.) I pranced, tiptoed the half-mile back to my hostel, where a cab was waiting for me and whisked me off to the airport to catch a plane bound for Tokyo. And btw, my shoes are still nice and clean and shiny, four days later. Japan! It's so clean!

Posted with Blogsy
Posted by A Lady Reveals Nothing at 9:39 PM

What's up colleagues, fastidious post and pleasant urging commented at this place, I am really enjoying by these.
Also visit my web site ... tmj surgeons