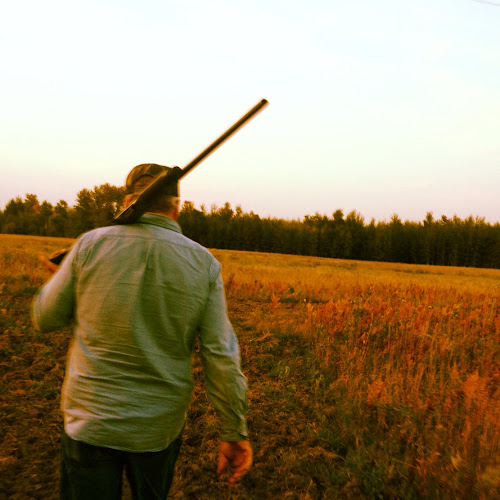 My memories of walking in the woods with my dad usually include boots that are too big for me, walking super fast but never catching up to him, and if I ever did catch up, getting hit in the face with branches I wasn't ready for. Also, he liked to route me past disgusting dead animals like rotting cows with distended bellies or deer carcasses chained to trees for who knows what reason, pretending he didn't know they were there, just to see my reaction.

But there are happy memories too. We always had to stop and look at Lady's Slippers, or pick wild flowers for my mom and sometimes we got lucky and saw something amazing like a brand new baby spotted fawn. I'll never forget how he used to stoop down and stick his finger in some animal's fresh poop, and then lick his finger. He'd think for a minute and then say something like, "he went that-a-way", or "he was here three minutes ago." I always thought he was SO smart. My dad. Such a genius Woodsman!

I learned later in life he really wasn't tasting the poop. He was just sticking his index finger in it, and then licking his middle finger. It's a great trick.

I tried it yesterday on a nature walk in Nepal. Summer and I went on a safari with five Hungarians, and we walked single file behind our guide, who carried a stick. In hindsight I suppose it was really stupid that we eight were out looking for rhinoceros and tigers armed only with one stick, but, When in Nepal... Anyway, our guide stooped down to look at some poop, which I took to be tiger poop. I decided to use my dad's trick after mentally calculating that tiger poop on my finger would be worth the laugh I'd get.

Except nobody saw me do it besides Summer. And it was wild boar poop.

Posted with Blogsy
Posted by A Lady Reveals Nothing at 6:45 AM