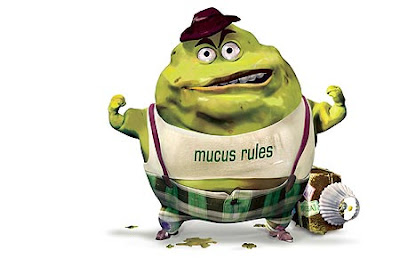 I have such a hard time 'expectorating'. And it's all I have been doing for the last 5 days. In the past I was a 'swallower', and suffered for the last day of every cold by puking up all of the stuff I had been swallowing for a week. And so lately I have diligently been trying to spit it all out.

My sister Kasey and most men can just go "HAWK!  TOO!" and it goes hurtling end over end 30 feet. Not me. I hawk and hawk and gurgle and cough and gag and then I have to hang my head over something and then spit and it never comes out right and sometimes I get it on me.

Last night I went to the GAP to spend a gift card and I had 4 pairs of clearance tights in my hand and a skirt on a hangar draped over my arm. I accidentally coughed and had a loogie on my tongue. So I didn't know what to do. I had no kleenex in my purse. I looked around and desperately wanted to swallow, but just couldn't. I decided I would go into the hallway and spit into the garbage. First I had to deposit the tights and skirt onto the purchase counter and say (with loogie on my tongue) "do you mine if i lee this heh?" and then run out into the hallway. Well the garbage can had a lid on it and I didn't want to stick my head in the tiny hole and try to spit, so I wrestled with the lid and it. wouldn't. come. OFF! Thank goodness for the Latina maintenance woman who was rolling her cart by at that time. I looked at her with desperate eyes, because when I have a loogie on my tongue it makes me gag and I WILL puke if I even so much as think about the loogie on my tongue.

I look at the lady, and I can't talk, and she looks at me like, 'what can I do'? and my eyes are red and watery and I say "I nee to spih", and she points at her paper towel roll and I nod and grab it and rip some and spit into it and then throw it in the garbage.

"THANK.YOU.SO.MUCH.!!", I say and walk back into the GAP and continue shopping.
Posted by A Lady Reveals Nothing at 11:08 AM

How do these stories ALWAYS happen to you?!?! This beautiful, petite,well built, blonde woman always has something nasty coming out of her body at inappropriate times?! lol!!!