I forgot about San Diego

Labels: San Diego
Here we are at Hotel del Coronado, having a nice little fire and a mojito for Marla, who wanted to come but didn't make it. She asked us to have a drink for her (we had many many drinks for her, and for Anna, and for ourselves, and for California, and for the sun, and flip flops, etc.)

This fire was quite the ordeal. First, we had to walk into the bar to get our mojitos, and ask if somebody could light the fire. Then we had to move all the cushions from another table (that didn't have such a nice view of the sundown and so we didn't want to sit there) and then they were a little damp and so whatever, but then the clouds came out and we really couldn't see the sundown anyways. So this guy comes to light the fire for us and we had to feel really bad about it. His name was Pedro and he was very weird about us learning his name and he repeated it several times and then finally we all said Pedro like 30 times. We even explained that our brother's name is Pedro and Andrea's husband's name is Pedro. (Well, Pete, but same thing.) A little later on that evening, we saw Pedro and another dude WALKING AROUND ON THE ROOF of the Hotel. So of course we screamed, "PEDRO!" and he waved. I don't know why San Diego decided to be so darned cold and rainy when we went there, but these outdoor fires were the cat's pajamas. 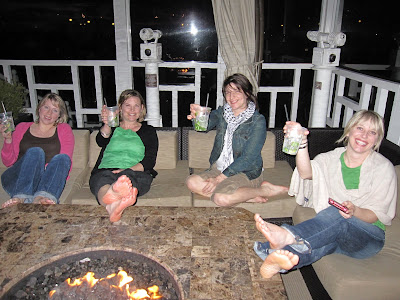 Posted by A Lady Reveals Nothing at 12:01 AM

You all look very cute in that picture. Why are you holding a harmonica? Do you know how to play? Did you play for everyone out on the deck?

PEDRO!!! That story makes me smile. I wish you were playing the harmonica Kady that would have been the cat's pajamas.

im so happy Pedro did not tumble down the roof when waving at us. Thats all I could think of as I was waving

That harmonica is my phone. Once in a while it plays a song, but it's that dumb song that comes with the phone and I can't figure out how to change it.

I wish I was the girl who brought a harmonica with me everywhere I went, playing out my blues next to a fire.

I don't think Pedro took the picture. I think it was the people at the bonfire pit next to us.