Labels: family, life up North
Ben, Kasey, Keri, Miles, Murphy, Miyo and I all piled into the minivan and headed up to my parent's house in International Falls to visit my brother and his wife. We all planned on leaving Minneaoplis at around 5:30ish, but after running several errands (grabbing Dramamine so the kids wouldn't barf in the car, heading to Golden Noodle asian market to pick up sushi making supplies for mom, and hitting the Seward Co-op for snacks for the road) we finally got on the freeway about 7pm. So we didn't get to mom and dad's until midnight. We made excellent time, considering we picked up Hanna and Skete in Cook. If you're doing the math, yes, we had nine people in a minivan. REDNECKS. But it was only for about an hour.
When we got there we stayed up until 3am singing Karaoke. Here are some photos of that...(warning: also in the background you may see some dead animal pelts) 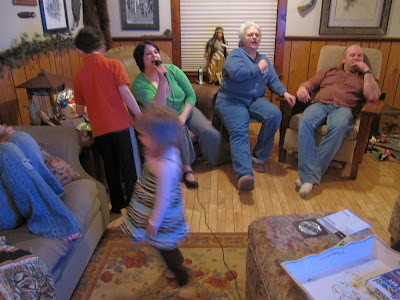 Even Skete got in on the fun: (turns out he just needed to KNOW the song we forced him to sing.) 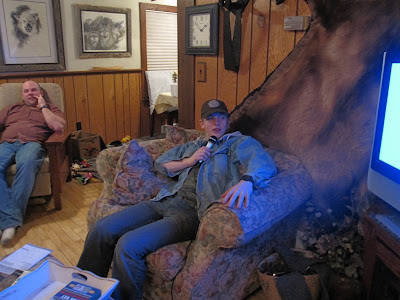 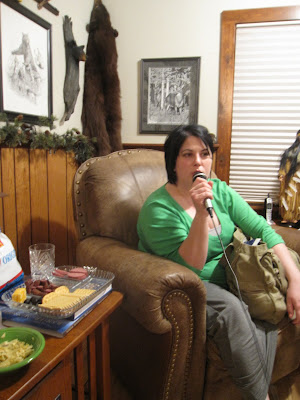 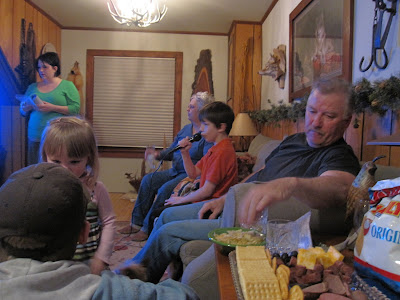 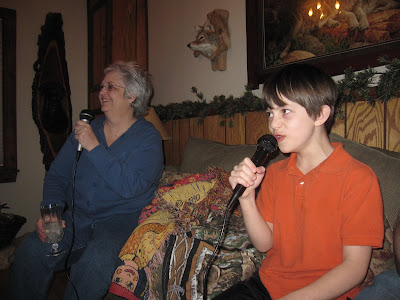 And then we woke up around 9am on Saturday and just sort of hung out and did nothing all day. It was most excellent. We were missing Kelly and Mike and Karley and David and Marc but otherwise we were all there. That was nice. It's hard to get us all in the same room at once with 6 kids. Anyways...we made sushi!!!
Posted by A Lady Reveals Nothing at 10:22 PM

I love the one where mom is singing with Kasey and the wine glass is her microphone.

Wine is around 18% alcohol, what she had in there is much stronger.

I must have already been in bed at the time of this picture.