The Funnest Day Ever

Labels: Auntie Kady, family
I bought a little tandem thing for my bike so that I could go for bike rides with Murphy this summer. I had it hooked up a couple weekends ago by my friend Ben and then it wasn't quite fitting my bike so I went to the bike shop and had it tightened and tweaked and finally now it is ready to go. Miles wanted to come too and assured me that he is riding his bike now without training wheels. So I had Miles and Murphy over today. We set out but first had to stop at the gas station and fill up all the tires. That was kind of an ordeal but whatever and so then we went to the bike trail along Minnehaha Parkway from Cedar going East. Miles was nervous and uncomfortable and struggled, and I'm pretty sure he was totally going to harsh my mellow, but after a lot of helpful encouragement (angry yelling), he finally got it! We rode along the parkway and he was able to go a little further each time and finally went pretty far. And then it was time to take a break. We went out again and we decided to go all the way around Lake Nokomis and we ended up doing about 4 or maybe 5 miles total! Murphy LOVED it. He was laughing and laughing and smiling the whole time (except when I took pictures...?). We had so much fun. It was fun seeing Miles go from nervous and scared to having a blast trying to do tricks and me being nervous and scared.

This one was taken after a particularly ouchie wipe-out and me forcing him to smile: 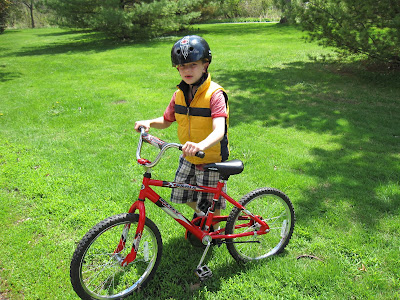 Photo taken over the shoulder of my little Murphy: 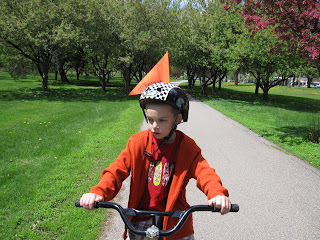 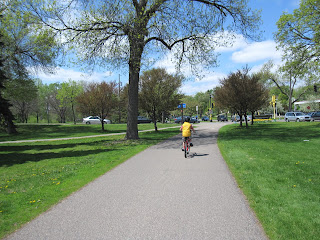 Queen of the self-portrait photo: 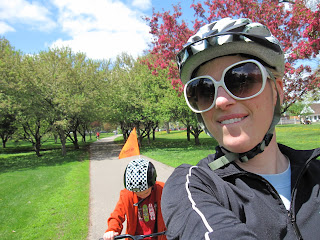 Posted by A Lady Reveals Nothing at 9:19 PM

I WISH we had bike trails. We either have to ride on pot-holed gravel, or on paved roads with NO shoulder and curves where people can't see you and will totally, run into you and knock you off the road. John offered to go for a bike ride with me today, and I turned him down. Bummer! I need to get into it, but it's really not fun here. I LOVE that people are figuring out what turns Murphy's wheels (pun not originally intended) and accommodate him. I can just hear him laughing and giggling and loving it.

Great pics! Is your helmet on backwards?

Cool pics, it looks like spring has finally arrived there. I took Brooklyn bike riding in a state park out here about a month ago and we had a ton of fun. I should do that more often.