Labels: Kady Stupid, The House
I really think that last fall one of my neighbors told me to "help myself" to the bricks that he has laying between his garage and his next door neighbor's garage. I wasn't 100% sure though, so I knocked on his door and he was NOT HOME. So, Kerrie G. and I jumped his locked fence: 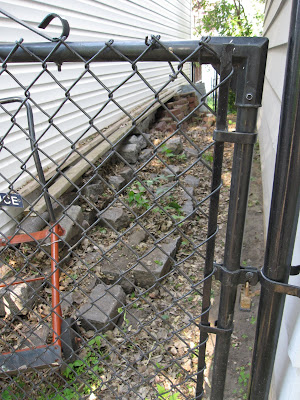 We tried to use this rickety old wheel barrow for the job, but it's tire was completely flat. So I asked another kindly neighbor who was home if he had a wheelbarrow so that I could steal some bricks from ol' Jon the other neighbor. He said no, but agreed to help us move them. Each brick weighs about 6 pounds, so after a couple trips carrying one brick each, Dave decided to pull his car up and we filled his trunk twice with a total of a about 30 bricks. We used them to create a little stepping stone path that is SO CUTE in the new garden from the previous blog. I was pretty nervous though about stealing...fortunately he said it was OK when I caught him home yesterday. He said I could have all of them. And I will. They are great for landscaping and FREE! 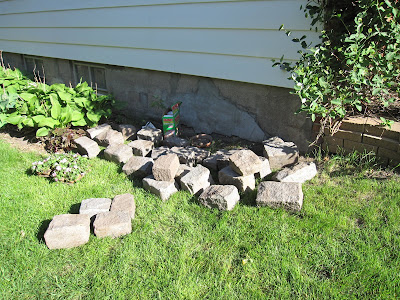 Oh, and here is the kindly neighbor Dave, who, after helping us move all the blocks, noticed that I had a shingle missing from my roof. He went home, got a ladder, repaired my roof, and then noticed that my gutters needed cleaning. So he cleaned them. I paid him with a gin and tonic and a vodka orange juice. SUCH A NICE GUY! 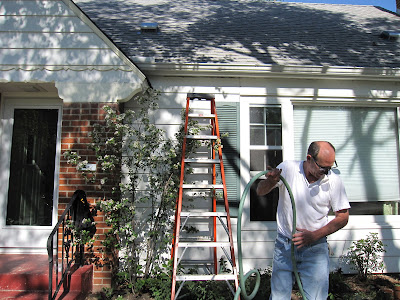 And here's Heather, who had the horrible job of digging holes to put the really thick bricks into the ground, and only my fake Crocs protecting her foot from the shovel. I tried it the next day and it was like sticking a spade in the ground with socks on. Poor thing. 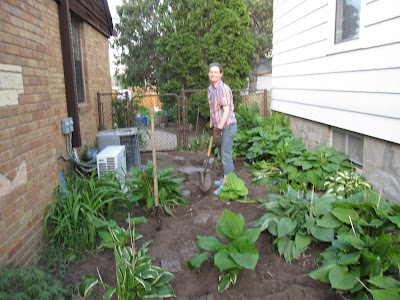 Posted by A Lady Reveals Nothing at 12:53 PM