Labels: Currently Obsessed With..., irritated, Kady Stupid, misunderstandings, The House
When I was out in San Diego with the girls, I noticed that they (certain people in San Diego) have this great trick of leaning bamboo fencing up against their chain link fences, and using zip ties to secure it in place, in order to beautify the ugly chain link fence. So I googled 'bamboo fencing' on a whim and found:

And ordered up some bamboo fencing of my own. FREE SHIPPING, they said, and so I ordered up seven 8 foot bundles, 3 feet high. (You should have seen me measuring that fence with my sewing tape. Looked like I was going to make the fence some pants.) I actually measured 50 feet of fencing with a 36" tape. hahahahahahahaha

ANYWAYS: Apparently the free shipping applies to everything but fencing and they called me later to tell me that it would be ONE HUDNRED DOLLARS just for shipping. "NO! WHATEVER!" I said, and cancelled the order. And then I was like, crap, now what, and so I called back sheepishly and said, "never mind on that whatever."

So then I get a call from someone and they confirm that I want it shipped to my business address. (I have all of my online purchase mistakes shipped there because I'm never home to sign for anything.) WELL: they said it was coming on a palette. Yes, a palette of fencing was being delivered to Advisors Mortgage, LLC for one Kady Hexum, Idiot. I'm like, 'How am I going to get this home?' But, it was $60 more to deliver to a residential address. The guy was acting like we had a loading dock. And so for a week I stressed about it and sure enough, when he arrived he came in a full-on semi truck. I told him I would drive up to him. Fortunately the palette was very short and I was able to fit all seven bundles in my car, but I had my friend Alason's Honda CRV on reserve just in case. p.s. that was the day that some loan officers brought a bucket of Long Island Tea mix for lunch and I was super haha silly with the semi-truck driver. ANYWAYS, got the stuff home and it sat there for weeks until I could convince Cory to come and install it for me. I really didn't have to do anything. 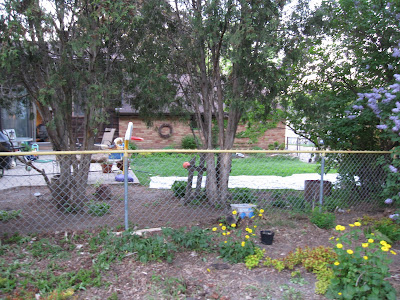 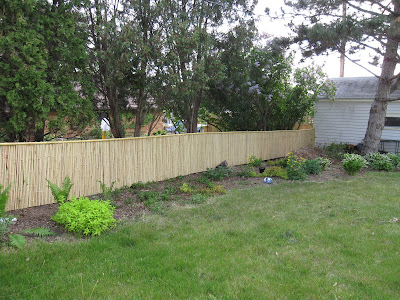 We did have a little disagreement about the spray painting of the chain-link fence, which, when he described over the phone, I thought sounded so ugly, but as you can see from the photos, it looks really good. He actually bought a can of yellow and a can of brown, and artistically sprayed the brown intermittently so that it looks like bamboo on the metal parts. WOW! WHAT A GUY! you might say, yes, that is true. What a guy. 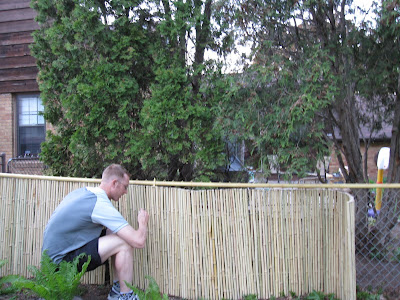 Posted by A Lady Reveals Nothing at 10:15 PM

I really like this idea... Elliott and I am trying to decide what to do with our backyard...this looks really good. Besides shipping, was it expensive? - kate

you are forgetting to add that it is really green: sustainable and no stains or chemicals needed because it weathers well,unlike wood.

...Completely negated by the spray paint. Oh well. I try.

That bamboo fence looks gorgeous!!! And that was a begenious idea of Cory's to paint the metal rail, in the pic it totally looks like all bamboo.