At first this seemed really cool...

Labels: Scandinavia
When planning for the trip to Norway, I watched Rick Steeve's Scandinavia (from Netflix) and he mentioned that in Sweden you can stay. In a Hostel. On the water! It's a boat!! So, when planning the trip, I got it in my head that we would stay in a boat hostel when we stayed in Stockholm. I didn't book it though, as you'll recall...I only booked through the flight TO Stockholm when planning here from my bedroom/cube computers and I decided that I would worry about Stockholm...later.

So when we arrived in Stockholm, and we found the Viking ship right away, we explored Old Town (a little island within the city known for shopping) and found an Internet Cafe where I googled "Stockholm Hostels" and the first, most inexpensive one that came up was the boat hostel! Rygerfjord, it was called. YAY!! Just like on the Rick Steeve's movie! So I booked it. And then we got on the 25 hour boat ride to Helsinki, spent two nights there, road 7 hours of ferry to Estonia and back and rode the 25 hour boat ride back to Stockholm and the last thing I wanted to do was freakin' sleep on a boat. But, we had to. And so we did. And by this time we are so excited at the prospect of going home. It's only one night away!!! All we have to do is explore the awesome sights of Stockholm for about 24 hours and then it's Home James! But. The boat. ARGHHH...I can't stand the thought of sleeping on a boat. But, we had to. I already said that. But, we really had to. 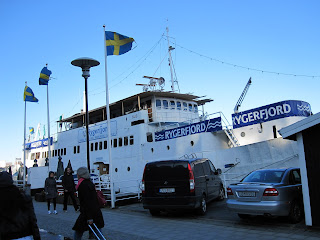 I really didn't want to bring out my 'hostel sheet' any more because I had washed it at Bergen and it was all clean in the bottom of my bag. Ross was in the same boat. Literally, but also he didn't want to use his king-sized flannel sheet for the last night of our trip. Then, like a light bulb went off he remembered that he had brought one of those emergency tin foil blankets and decided he would use it for a sheet and then throw it away. I immediately got very jealous because I am not as good a packer as he, and I didn't have a disposable sheet to use. So I had to get out my sheet, and Ross got out his huge tin foil situation, and we watched some office and went to bed. Well, during the night about 6,000 times, I thought that he was fed up with the sheet and balling it up to throw it away. Turned out he was just turning over in his sleep. That thing was LOUD. And sweaty. So, in the end I was glad I didn't have one. Look at my cozy, tiny little upper bunk bed: 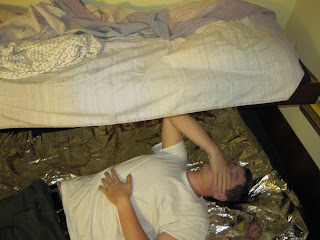 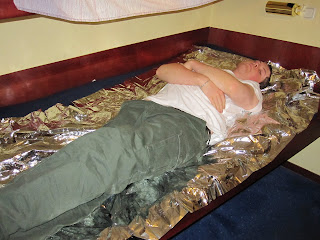 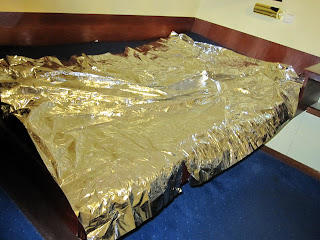 One other funny thing that happened on this boat is that there was a window, that was a circular boat window and the room was HOT. I wanted to open the window, and the bathroom upstairs of us had their window open, so I figured we could open ours. We tried and tried, but it wouldn't budge. Then I got into my upper bunk bed and saw out, and it turns out that we were just about level with the water, and so if we had opened the window (or been able to) water would have come in. So I says to Ross, "Ross! hahahahaHAAHAHAAHAHAAAAA!!! get up on this bunk and look out at the water level." And he goes, "I can see it".
Because he's 6'4".

Posted by A Lady Reveals Nothing at 9:05 PM