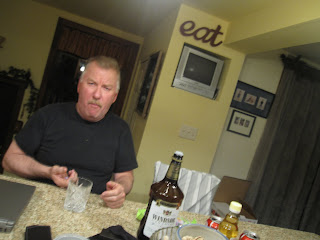 So my dad doesn't like to leave International Falls. And I dont think he ever would unless forced. Well, mom and Keri must have twisted his arm because he is on his way right now to Ohio where my sister Kelly lives. They stopped over last night as I mentioned, and this morning, at breakfast, my mom insisted that dad take out my garbage because it STUNK. BAD. So he goes, "is it safe?"


(Probably because last night as I was directing them to my house I was trying to steer them safely through the streets of Minneapolis to my place. There was lots of talk of 'bad neighborhoods' and 'bad areas', etc.)
Anyway, I explained that it was safe, and dad said that he would probably see a little kid walking a dog and poop his pants. Then he said,
"They're probably lining up waiting to whack me with a stick."
Posted by A Lady Reveals Nothing at 10:27 PM