Labels: Scandinavia
While we were in Oslo, we stayed a total of three nights on this man's couch: 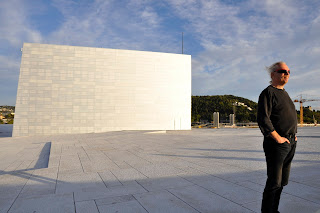 That turned out to be one of my favorite photos of the trip. He looks so mysterious and Norwegian! I don't think he knew I snapped this shot, so he was totally not even posing. Anyway, Inge Bjart met one of my coworkers in Spain years ago and based solely on her email request, he agreed to let us stay on his couch, and show us around Oslo since he would have some free time.
Also, he fed us breakfast every morning with coffee and let us do laundry at his place. Twice. He spent about 2 1/2 days walking us around Oslo. We saw Viegland Park, the Ski Jump (which is currently under construction), the Scream by Edvard Munck, several museums, the waterfront, the fortress, and many more Oslo attractions.
When I forgot my memory card in Bergen, he suggested that I ask the man at the Internet Cafe to mail it to him, and then he would mail it to me here in Minnesota. I received it today!
He told us all about Norwegian culture and politics and it was great to be treated to Oslo by him. Gotta love the local's perspective. He's the one that told us that $28 for a meal was pretty 'reasonable'. Anyway, he's a cyclist and once was sponsored to cycle around Iran. We learned that in Norway, your education is free your entire life, even college and graduate school. Your health care is always covered, your pay checks get taxed pretty heavily, but you'll receive a pension of about $50k when you turn 67, and your family will receive an inheritance if you die. When a couple has a baby, the mom and dad get a total of one year off at 80% of their pay, and either the mom can take it all or they can split it 6 months each, or whatever (this one is weird and cool and I'm not totally sure if I got the facts straight so don't quote me).
**I met a woman while we were on the bus to Preikestolen and she is living in Oslo with her husband and child. He is working at the University of Oslo as an Evolutionary Geneticist and was paid double if he brought his family with him. (He's on a 5 month job.) She enroled her little boy in school and told me that he has 2 hours of recess per day, and once per week the teacher takes the students on a nature walk in the forest and teaches them about plants and trees and animals and stuff. It's hard to get a job in Norway if you're from the States though: you have to prove that you'd be better at the job than a Norwegian. She explained that in his field at the University only about 30% of the other Scientists are from Norway.**
Anyway, if you're a student, you can stay in Norway and in some cases study free as a foreigner, but you have to move away when you're done studying. hmmmmm...., I'd love to study for free, if only I could afford to live there!
Anyway again, Thanks Inge Bjart!!
Posted by A Lady Reveals Nothing at 10:54 PM