Labels: Scandinavia
Paula Koivuniemi. Free. At the Casino in Helsinki.
It was like seeing Liza Minelli for free at a Casino. This woman is a Finnish legend. She didn't quite pack out the crowd, but her fans were rabid! There was a woman behind me who was dressed exactly like Paula and was flipping her hair around and singing every single word to every song. Also, she was in her 60s. (I guess that's true of both Paula and the woman behind me.) 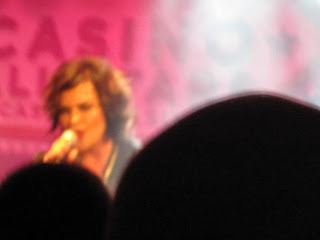 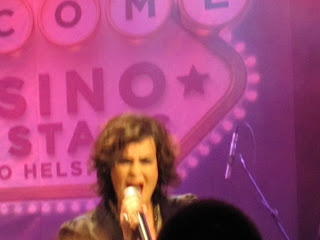 Ross opted out of this evening, in favor of a good nights' sleep. I couldn't resist the kitchy-ness of a Casino-Singer Entertainment night.
It was kind of an ordeal because after we Trammed it all the way down to the Casino, I was denied entry because I had forgotten my passport and apparently you can't go into a Casino in Finland without your passport if you are a foreigner. Strict rules. Even if you're just there to see the entertainment. I couldn't even go in and get a drink. I was planning just to hop on the train and go back to Tiina, Veera, Saara and Pinja's apartment and get my passport, but my very sweet new friend Veera delivered it to me even though she was very tired. I'm telling you these girls in Helsinki were so hospitable!
This is Minea, Jenny and me at the Casino bar: 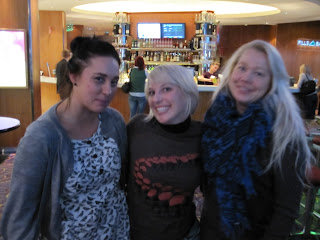 Of course we had to check out the Casino, and it was hysterical because there were games called "Mermen" and "Filthy Stinking Money", etc. Also, you could bet on the horses, which were basically weird little computerized horses (see below) and they sort of raced eachother around the track. I couldn't figure out if there was a strategy for it? 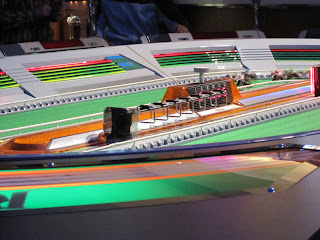 Here we are, pretending to play the slots: 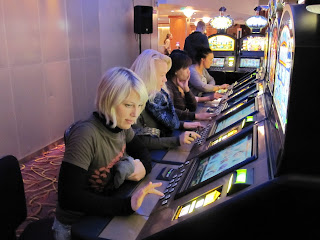 Posted by A Lady Reveals Nothing at 8:44 PM

Yeah, right! You are playing the slots.

probably would have, but it wouldn't take my American quarters :(

Beam us up, Scotty!

haha LOL that's what I was saying, as I was pretending:

"Captain! We cannot get into this galaxy!"

I think I am in love with Mike Monroe.