Labels: Scandinavia
I'm skipping way ahead in the story of the trip and will have to go back to the parts about Preikestolen and Oslo later, but today we are in Helsinki andhaving a nice time. We took the Viking Line (party boat) from STockholm to Helsinki, and it boards about 4:30pm and arrives the next morning at 10am. For us, it was not a party boat at all. We stayed in the cabin and watched the office and got ready for bed. Ross took a nap and I explored the ship a little bit. I thought it was weird and ironic and maybe a little insensitive that they played the theme from Titanic by Celine Dion as we left port. We had to go to the VERY bottom floor to find our room, but it was a bigger than any room we've had so far and had four beds. There was even a WARM WORKING SHOWER. I took some photos and shopped the duty free shop, and then finally around 10:45 Ross said, we should go to sleep and then I realized that there is a time change between the two cities and so we were going to lose an hour! We ended up not getting the huge amounts of sleep we were hoping for. AND in the morning, I realized our alarm clock (my iPod) didn't immediately recognize the time change and so we gained the hour of sleep back but lost an hour in the AM of getting ready. Plus, we had some trouble at the arrivals area of the Cruise ship place trying to use the phone/internet, but a New Zealander lent us some money to make a phone call to Veera, Minea's friend and we got directions to their apartment. We had to take two trams. Tram 4, straight from the harbor had a NICE driver who helped us and gave us advice and told us when we got to our stop. Tram 3T was driven by a huge jerk, who first off told us that he doesnt go to Arkadia street where the girls live and we should get on the 7 tram. We did get off the bus, but we got back on because Veera told me to take 3T and I believed her. I talked to a man on the tram and he confirmed that we just had to get off two stops past the stop where he got off. And so we did, we got up and started walking to the door, which the MEAN driver opened for two seconds and then SHUT really fast, so we couldnt get off. We had to get off at the next stop and walk back. No big deal really. But Pinja was waiting for us. Veera had to leave for work. Pinja gave us a phone, keys to the apartment, offered us the shower and said we could stay here in the apartment. YAY!!!! So we're all taken care of and we spent the day in Helsinki walking around, meeting new friends...and tomorrow we're going with Arto to Estonia on the ferry and that should be fun also. 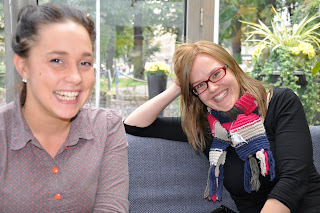 Click here to see more photos of Helsinki
Posted by A Lady Reveals Nothing at 10:44 AM

Minea-sota oh how we love thee. And Veera, how's my sister.