So Here Is What I Learned About Wombats 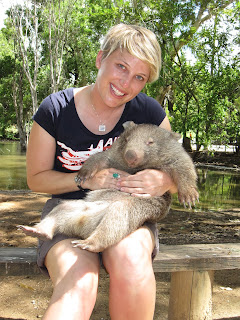 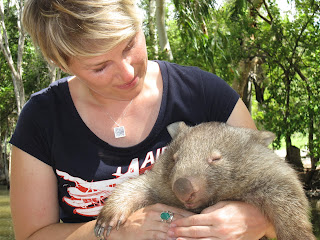 Wombats are generalists, meaning they'll eat a variety of foods.  (A koala is a specialist, only eating eucalyptus leaves.)  They dig holes under the ground and live in burrows.  They have the same cartilidge plate in their butt that a koala does, but where the koala uses his for sitting, the wombat uses his for protection.  A shield.  They can run 40-50kph!!  So if a dingo is chasing them, they start running!  And then stop!  And the dingo gets knocked out.  Also they sleep in their burrows with just their butt sticking out.  So the dingo can chew and chew at their butt all it wants, but the wombat will not feel it at all.  And the dingo gets nowhere.  If a dingo happens to get into the burrow, the wombat lets him.  He lays on his back, very still.  Now the dingo gets all the way on top of it to go for the jugular.  At the last minute the wombat uses it's strong legs to KICK! the dingo up into the air and knock it out on the ceiling of the burrow (or hopefully crush the skull.)

Plus they are cute!  I got to hold this little guy, named Tonka.  His mom was hit by a car, and a passerby checked to see if she had a little nugget in her pouch, and sure enough, there was Tonka.  He is being raised at the sanctuary.  He is 12 months old and bottle fed.  In the wild the wombat stays by the mother for 2 years.  He was so sleepy!  He fell asleep twice in my arms.  And then they were bottle feeding him they had to shake him awake a couple times because he just dozed off.  While eating.
Posted by A Lady Reveals Nothing at 6:49 AM

Wow. I desperately want a wombat. You're so lucky to have gotten to hold one!

He doesn't look like he can run very fast at all. Or he's just drunk on love from hanging with you. The cartilage stuff just sounds gross. The only reason i know about cartilage is my knee surgery. Maybe they could transplant that into my knee. Just a little from Tonkas' Badonka would do just nice.