The Events Surrounding my Birth 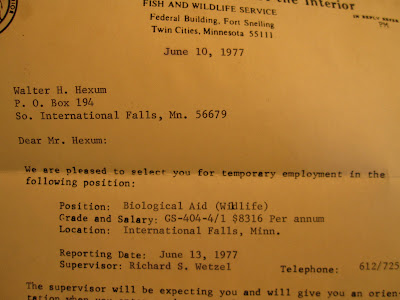 Me: "Dad, do you suppose you were more excited about getting this job than you were to have a baby that same day?"

Dad: "Well, I was used to having babies.  I wasn't used to getting hired by the Federal Government."

Apparently that wolf-trapping job had my dad away from home quite a bit. I found per diem refund receipts that show him leaving for a week or weeks at a time to check traps. He told me that one day he came home from a stretch away. I was very tiny, but old enough to be standing at the door when he arrived. I looked at him, like very nervously, and my mom said, "that's your daddy. Go say hi!" (He probably had grown a long beard and I didn't recognize him.) He says I walked right up to him, turned around and sat on his feet. So there he stood, with his baby girl sitting on his feet.


Me: "Why were you and mom writing checks the day I was born?"

Dad: "Well I was probably going to the grocery store to feed you gol' dang kids."

Me: "Actually, it was mom.  And she wrote a check for 50 pounds of Purina High Protein dog food." 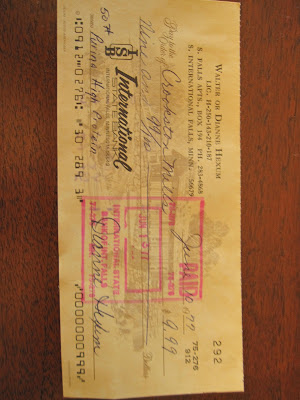 I called my mom today at work and she told me that I was born in the evening, because after running her dog food errand, (imagine buying 50 pounds of dog food 9 months pregnant!) she came home and decided that if she drank a beer, it would take the pains away and hurry up her labor.  So she had a beer and went to bed.  Then I was born!

MYTHS and LEGENDS:
I *think* when my mom was pregnant with me, she had to have her appendix out.  I have a memory of being told that the doctors thought I was a tubal pregnancy, and so they went in to take me out, but in a miraculous turn of events, they realized that the baby (me) was just fine, and it was the appendix that needed to be removed.  This memory is probably as untrue as me thinking my great-great-great-great-great grandfather invented the coo coo clock.  I can't remember who told me that, but it wasn't true at all.  Apparently a distant relative was from the Black Forest region of Germany, and maybe worked on them, but didn't invent them.

Here is my favorite childhood Legend:

And the whole family was in on it.  Supposedly, the reason I was the only blonde kid was that Olivia Newton-John was my REAL mother, but was too busy on the road to take care of me.  Naturally she brought me to live with Hal and Dianne Hexum of International Falls.  Makes sense, right?  For years I would listen to her records and cry and cry.  Imagining that some day she would come and get me and save me from these people...

I did find evidence of a Hospital charge for $200 before I was born, so maybe the legend of the tubal pregnancy/appendectomy is true? 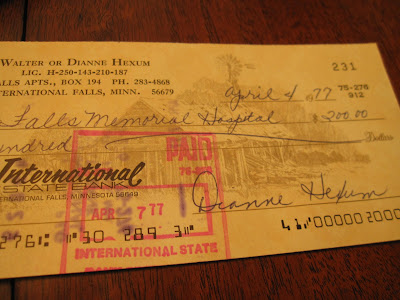 You know what I didn't find?  Child support checks from Olivia N-J.  Deadbeat.  Didn't even take care of her own.  No wonder her husband faked his own death.
Posted by A Lady Reveals Nothing at 12:13 PM

not her husband, rather he was her boyfriend.

it was her gall bladder, not appendix

Why does mom still have cancelled checks from 1977?