Labels: Auntie Kady, family, gross
I have had a second job for the past few years watching my disabled nephew Murphy.  I am employed by a company that provides Personal Care Attendants for families who need help caring for their kids.  Typically I would watch Murphy on Sundays at my house.  But, since I quit my job to spend some time traveling, I also had to spend that time away from my nephew and I really missed him.

Fortunately, his mom and dad are letting me watch him ALL SUMMER at my parents' house!  He has to be back to school around September 7th, so until then it's me and Murph and grandpa and grandma up in Northern Minnesota.  We're having a good time too.  Murphy loves City Beach, he loves chillin' in the yard here, he loves grandma's popcorn, and I am going to get our tandem bicycle up and running tomorrow so we can ride out to go swimming whenever the sun shines.  I know, I know, I'm supposed to be taking a year off from work, and now I have a full time job watching Murphy and a part time job waiting tables.  Somebody's gotta pay for luxury hostel accomodations, folks!  (read: somebody spent too much money in Australia.)

The point of this story is that when I got home from the first leg of my trip and picked up my mail, not only did I discover my drivers' license was about to expire, but I also found out that in order to work this summer, I had to go into the office of my employer to watch some safety videos from OSHA.  I found them incredibly disgusting and wildly hilarious.  At the same time.

The videos depicted multiple stabbed-by-hazardous-needle-in-hand-under-rubber-glove/blood-everywhere scenes.  Thank goodness Murphy and I don't have to work with needles, but two of the three videos were specifically related to Sharps safety.  And nobody warned me.  GROSS!  Ben (Murph's dad) came with and watched the videos with me (because I had no car and I forced him to drive me up to Coon Rapids).

The two of us spent 32 of the 60 minutes laughing and the other 28 minutes barfing into our mouths.  I should mention the movies were made in the 1980s.  In one protect-your-back scene, a "patient" fainted and fell to the floor.  But the actress playing the "patient" was apparently conscious enough to make sure her underwear weren't showing underneath her gown because she kept tugging it down to cover up.  Uh...take two, anyone?  Here is another thing I found funny:  An ANCIENT box of "Spic N Span" being measured with a teaspoon into a bucket.  ON TOP OF A TOILET.  Brilliant cinemetography. 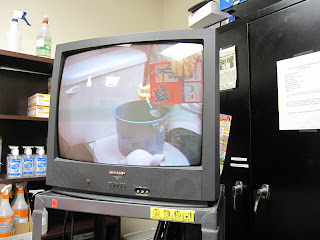 And here you can sort of see the fantasic hair and wardrobe people at work: 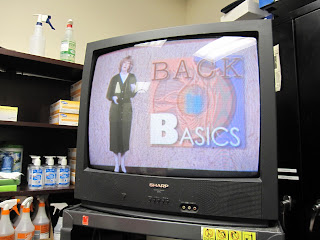 Ironically, I spent the following week in the hospital with my dad and had to get him in and out of bed.  Thanks, OSHA!
Posted by A Lady Reveals Nothing at 10:36 PM